I love rock climbing, however living in North Wales means it's almost impossible to enjoy climbing outside for half of the year during the winter, it's wet cold and generally miserable. Climbing indoors at indoor climbing centers is fun but no substitute to the real thing. For this reason it's a real treat to travel somewhere sunny and warm during the winter months to go rock climbing. I've managed to avoid flying for 5 years, instead in recent years opting to take the train to Spain, Morocco or Sicily

At the end of last year (2018) we converted a Nissan e-NV200 electric van into a fully electric campervan. We figured this winter would be a good opportunity to go away for a trip to the van. Traveling in the van rather than the train would allow us to take our Spaniel dog with us. Sadly due to  last minute change of dates lack of ferry doggy cabin availability meant we had to leave our dog behind :-(

We had heard about a new (for us) climbing area near Jaén in Southern Spain, some good friends of ours visited recently and gave the area high praise. Also, being in Andalucia it's south enough to have a good chance of being warm and sunny, a very important criteria for us!

2500 miles in an Electric Campervan 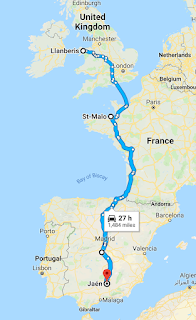 Our original plan was to drive from North Wales to Portsmouth then get a ferry to Bilbao in Spain then drive to Jaén in Southern Spain. However due to bad weather our ferry to Spain was cancelled, and we were forced to get a ferry to St-Malo in Northern France and then drive all the way to southern Spain. The unexpected drive through France was very actually very straightforward and was cheaper and faster than the ferry. Here's a video blog of the trip:

It's currently early days for EV's in Spain, the public EV charging infrastructure is not nearly as developed as other European countries. The north of Spain and Catalonia have decent public charging options, however the centre and south of the country is quite space. This made our trip in our low range EV van rather challenging. It was however, just about possible! The charging infrastructure in Spain is improving very quickly, even in the weeks before our trip two new rapid charging stations opened along our route with may more locations currently being built due to open later this year. Here's a video blog of the trip:

Here are the mobile apps we used on this trip to find and activate public charging points:

The climbing around Jaen was awesome. We mostly climbed at Reguchillo and Cuevas negras crags.

Reguchillo has some really nice climbing especially in the upper sectors, it faces due south so gets the sun all day until 5:30pin in February. At the beginning of the trip it was chilly so climbing in the sun was great, however we had a few days towards the end when it was too hot to climb in the sun, even in February! My favourite routes at Reguchillo were Lola Flores 8a , Nano 8a was also very good although I ran out of time to redpoint.

Cuevas negras faces north and does not get any sun. It was a bit chilly climbing in the shade, however the quality of the climbing was worth the effort. Cuevas negras was my favourite crag, almost every route there was totally amazing. The highlight were Aceituna Air Space 7c and Aromas de Kalymnos 7a+