Over New Year this year Amy and I travelled out to El-Chorro in southern Spain for a couple of weeks of sunny tufa filled limestone sport climbing.

Again, we travelled there and back via train: Bangor > London > Paris > Latour du Carol (sleeper) > Barcelona > Malaga > El Chorro. Even though it's a long way, El-Chorro is a great destination for train travel since it's possible to get a train right into the village, with the Olive Branch accommodation where we stayed only a short walk away. Once there all the crags are accessible by foot. The journey took a day and a half, but on the way back we gave ourselves the luxury of a night's stay in a Barcelona Airbnb. The journey cost £150 each way.

We stayed at the friendly Olive Branch and met up with our friends Will Oates and Becky Brown who are travelling about in their van. I've been to El-Chorro four or fives times before, I always enjoy going back.


Beyond enjoying the warm sunshine, good company, nice Spanish food and wine which is always nice the three main highlights of the trip for me were, in no particular order:

The massive bulk of Frontalas cliff dominates the view from El-Chorro, over the years I've climbed many lines in the many different sectors along the base of the cliff but never before attempted a long multipitch line.

As well as the established classics which are long and mostly very hard, in recent years there have been many new long lines established at all grades, some of which even topout! See Bernabe Fernandez blog for topos: http://www.bernabefernandez.com/en/my-way/el-chorro/frontales-medias-vias-de-largos/


This trip I climbed two big multipitch lines. Teaming up with Will Oates we climbed the classic 6 pitch Maquina Cualquiera (7b, 6c+, 7a+, 7b+, 7a+,6b+) (line 13 on topo above) which starts just to the left of the Poema de Roca cave. The route was amazing, almost every pitch was super steep, which is rare for a multipitch (that hasn't fallen over!). I was very pleased to manage climb the route onsight, especially the 7b+ pitch which surprisingly was the least steep pitch of the route, it was technical, difficult to read and almost slabby in paces! 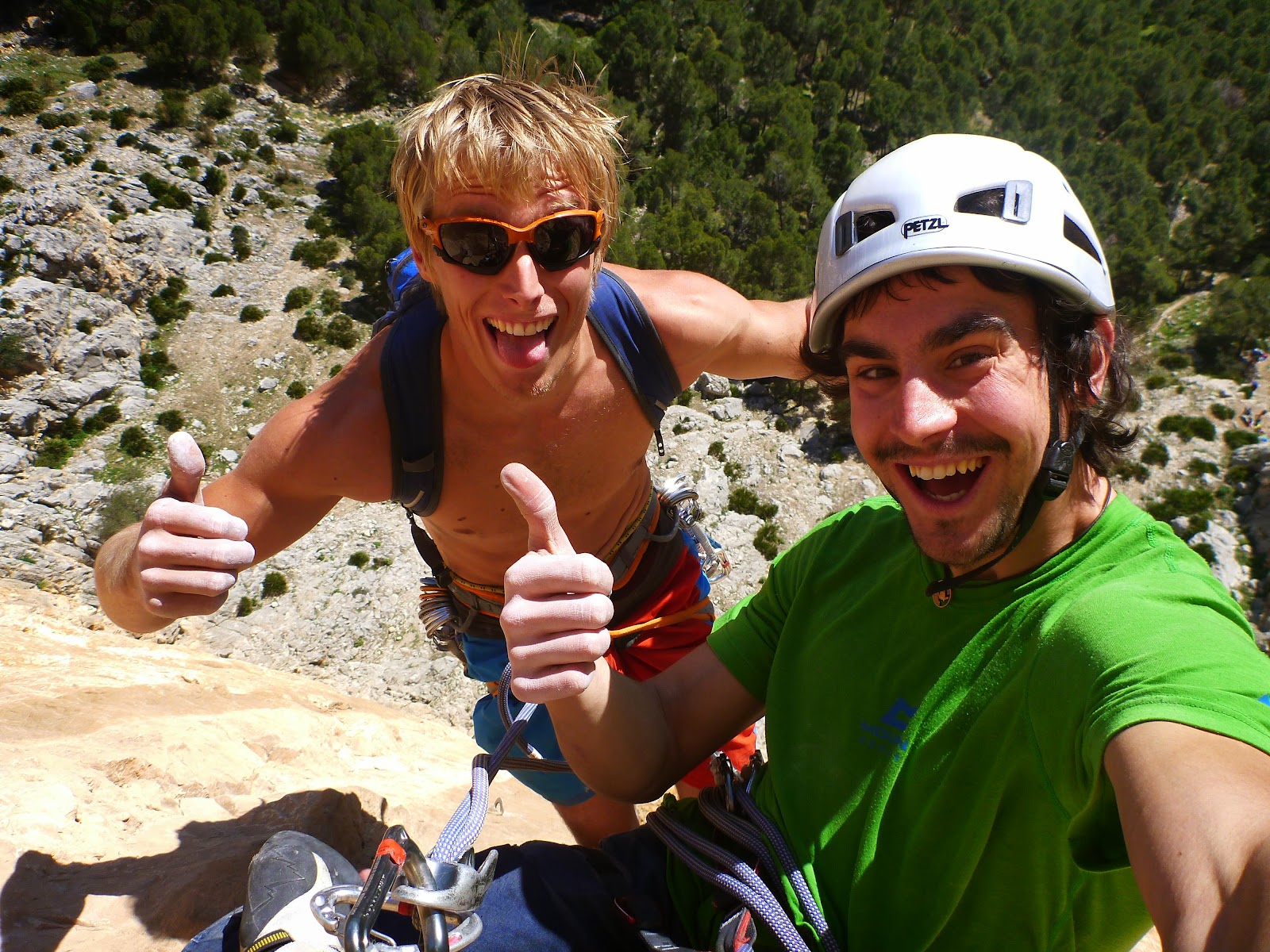 The second multipitch line was easier but longer going all the way to the top of Frontales. Climbing with Amy we stormed up the 10 pitches (F5, 6b, F4, 6a, 6a, 6a, 6b, F5+, F5+, F4) (line 16 on topo above) in about 5hrs. It was amazing to top out on Frontales, the view from the top was fantastic. On the way up we were lucky enough to get some amazing views of the massive Griffon vultures (wing span 8 feet plus) which nest on the cliff . 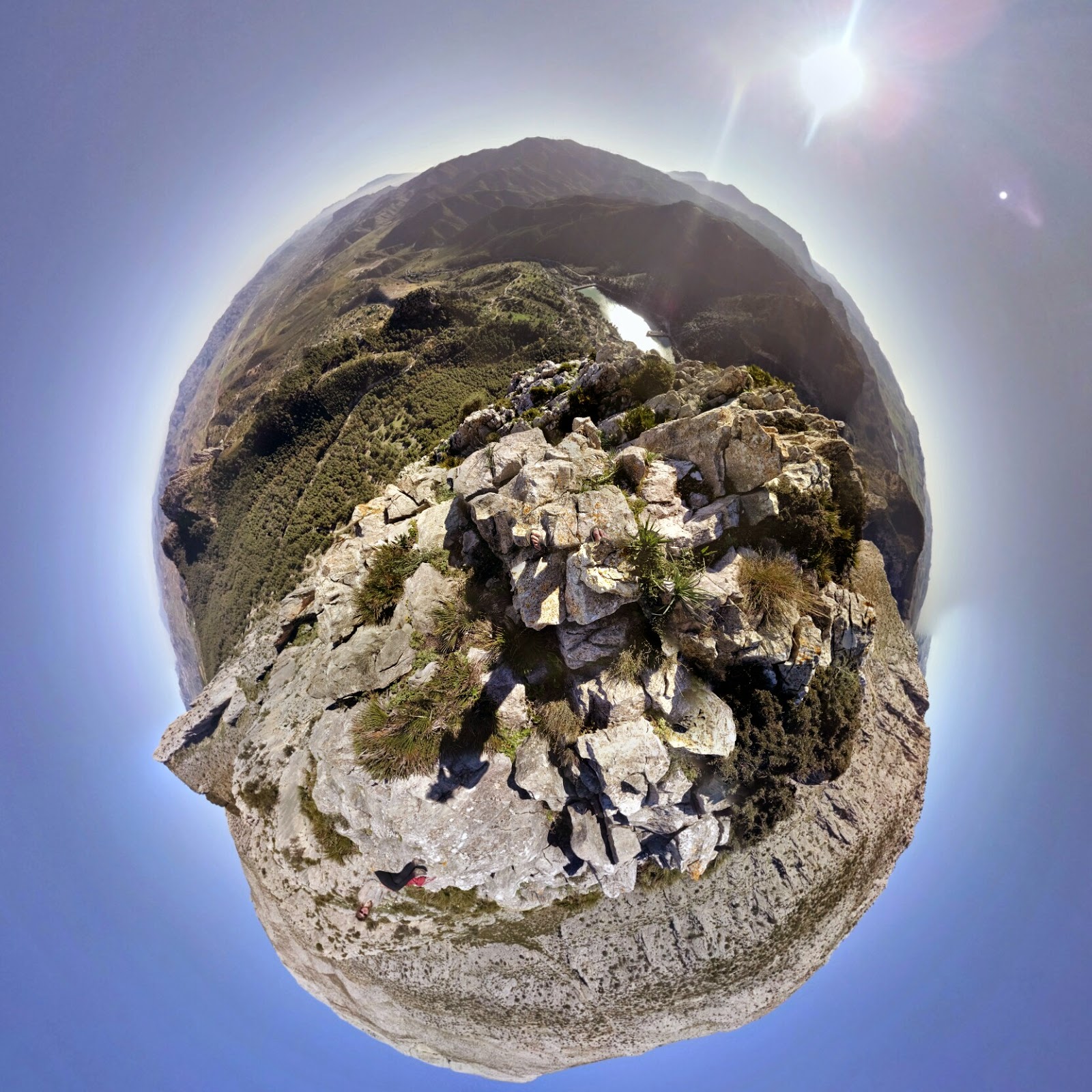 Getting to Makinodromo requires a little bit of hard work, it's about an 1hr and 30min uphill walk from the Olive Branch. Even though the height gain is less than walking into Ceuse the path is not as good and the horizontal distance is longer. In the past I've always walked in along the the train tracks before beating steeply up the hillside to the crag, however with the Camino walkway currently undergoing restoration the entrance to the train tunnels is guarded during daylight hours. This necessitated walking into Makinodromo via 'The Notch'. The RockFax directions for this approach are decent but a couple of attempts is usually required to nail it, this walk-in is not often on-sighted! Even though this walk-in in a bit of a roundabout way it's a very pretty walk through the hills with amazing views, most of the ascent is done at the beginning meaning you arrive at the crag feeling remarkably fresh. However given the effort of the walk-in and physical style of 'tufa wrestling' at Makinodromo two days 'on' was about all I could manage, a rest day is well earned!

This year I managed to climb Atlas Shriked, this long 40m route takes THE line of the crag: powerful moves start up a tufa system before swinging out onto an arête past a belay and a good (lay-down!) rest in a niche (7c+ to here) then onto a stunning big tufa system where upward progress is made by some wild bridging in space and then a climax of powerful moves and a big 'throw' to finish! Working the route with Will was a fun experience, we both found the first 7c+ section to be hard work. As always with tufa climbing finding a good sequence can be difficult as there are so many options! The first 7c+ section took us about 5 redpoints over two or three days. The final 8a top section actually went first redpoint after a couple of goes up working out the moves. 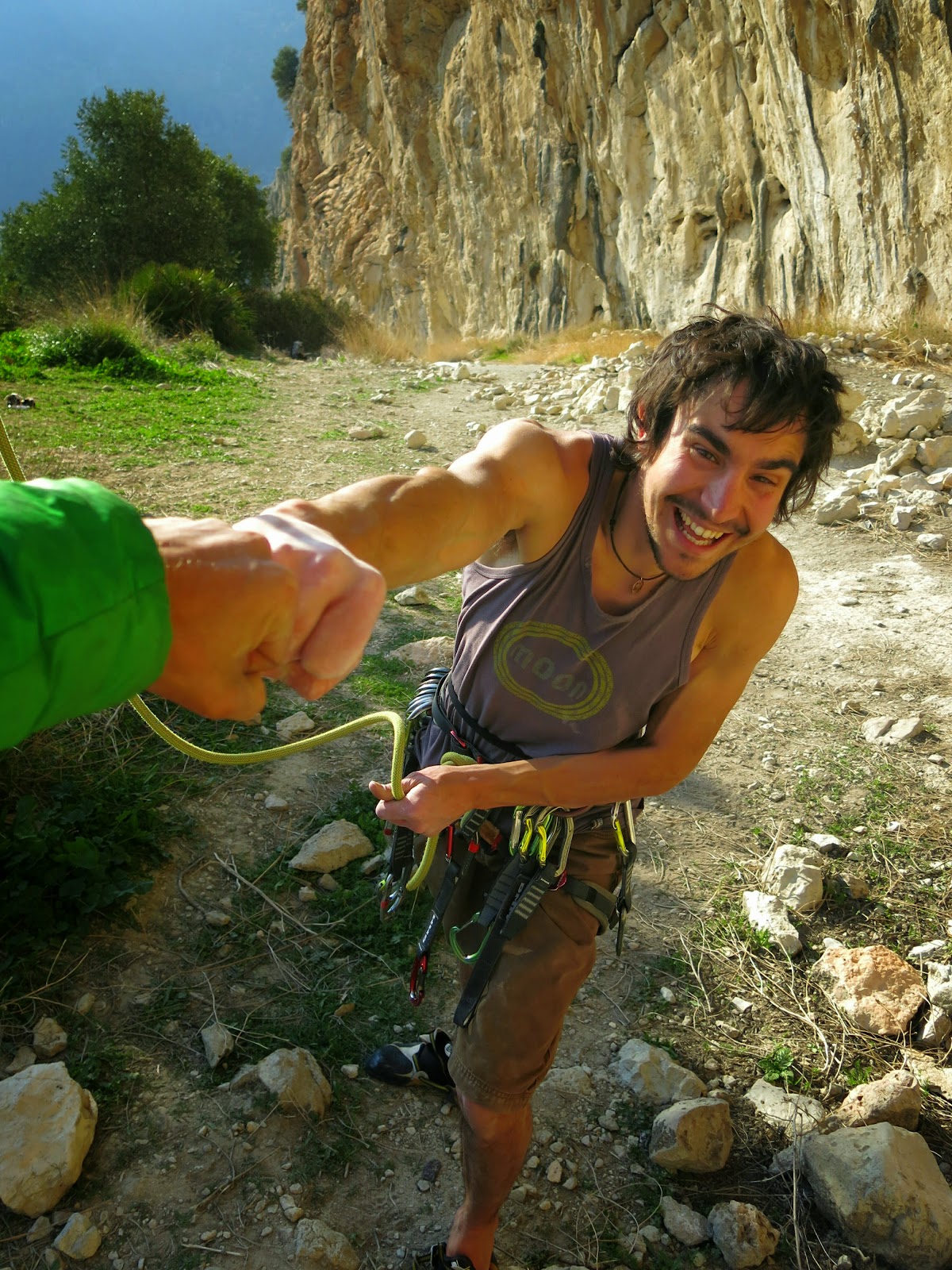 Los Tigres is the good looking crag which everyone walks past on the way into or out of Makinodromo. It's actually an amazing crag in it's own right. The climbing is very different to Makinodromo: less steep, smaller tufas and less polished. I found the climbing really suited me, I climbed an 8a first redpoint and a couple of 7c's onsight. However the highlight of climbing on Los Tigres was belaying Amy as she climbed her first 7a! The route took her about five redpoints over two days. It was inspiring to watch her work out the moves and try very hard. 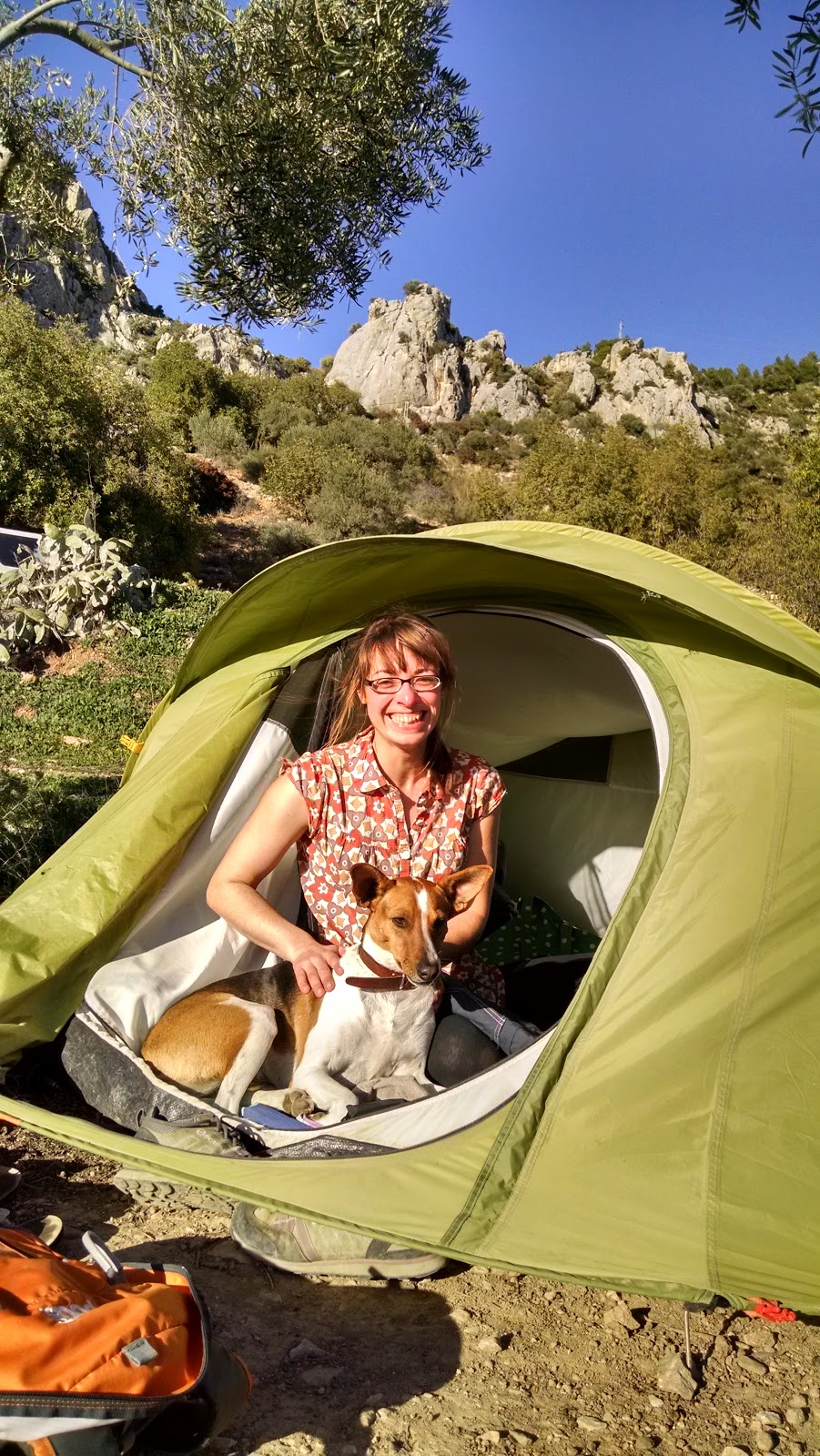 After two days walking-in and climbing at Makinodromo or a couple of long multipitches a rest day is well earnt to recover joints, muscles, psyche and grow some new skin on the fingers! I argue that resting well is a necessary part of sport climbing trips! After all, 'rest days are best days' :-) . Two rest day activities stood out as highlights:

Swim in the large blue lake on the way to Desplomilandia crag which was refreshingly cold but probably a lot warmer than Llyn Padarn is this time of year! The lake was sheltered from the wind with a nice view of wind-turbines smoothly doing their thing in front of the setting sun. 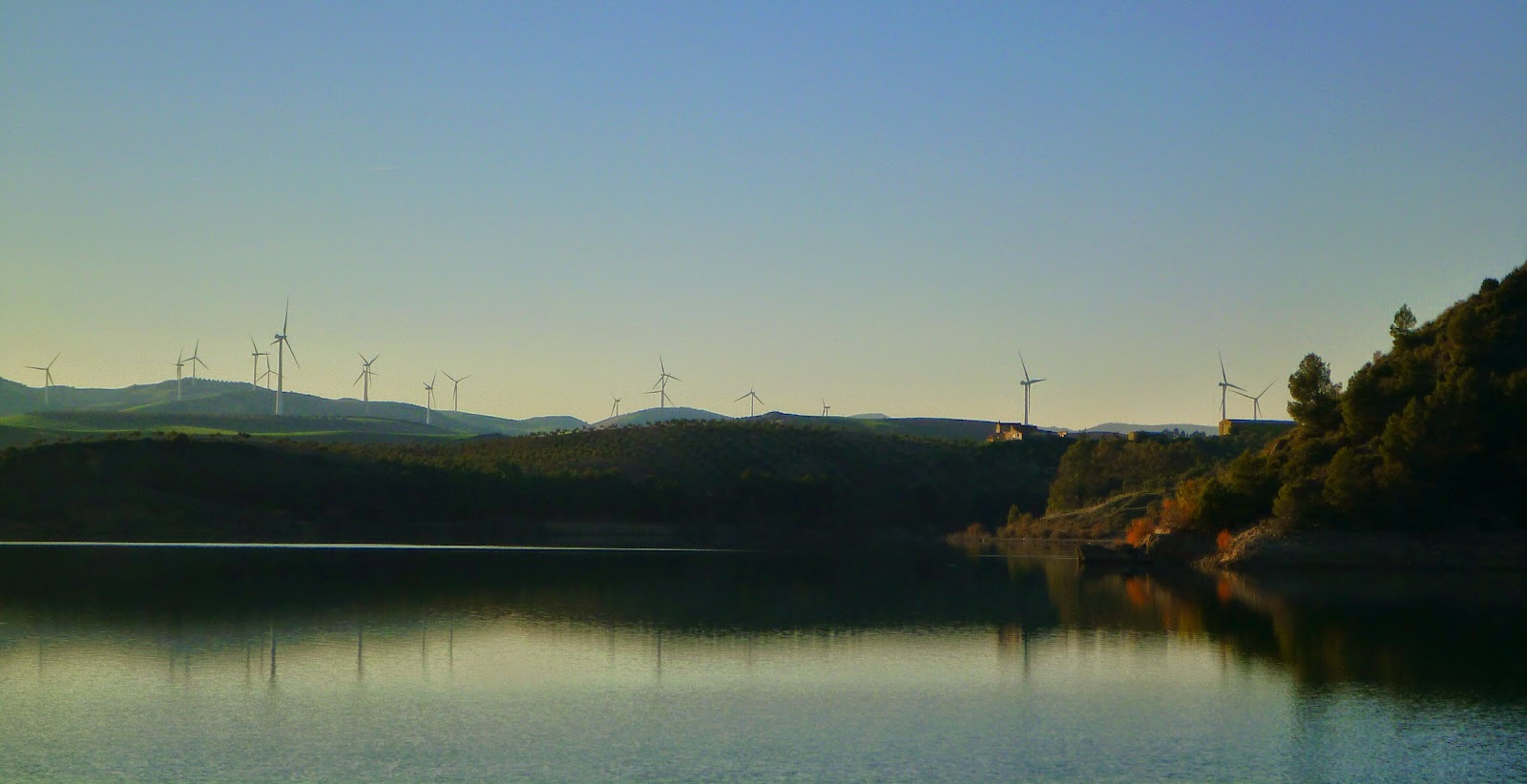 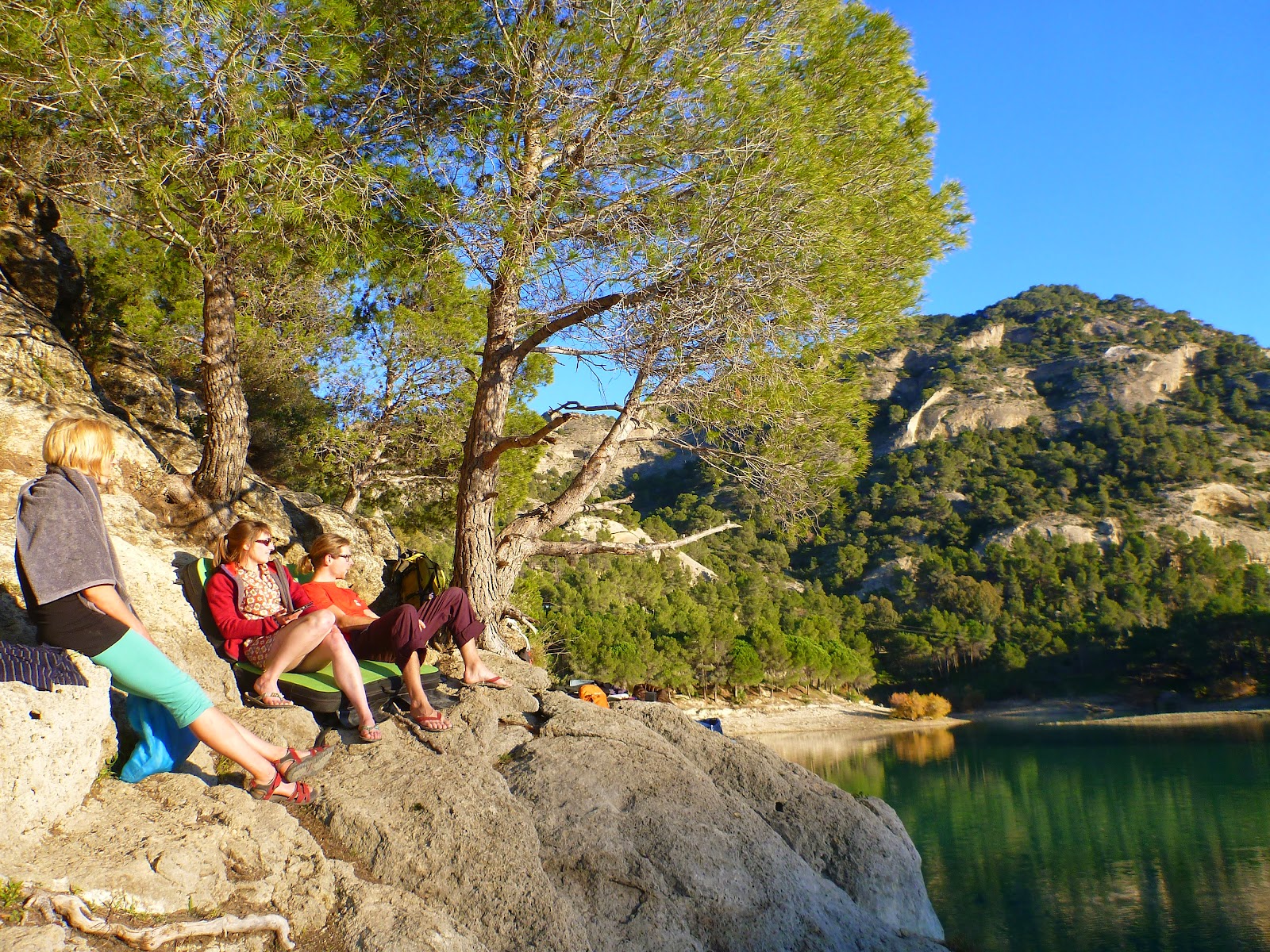 On another rest day we got the train from El-Chorro through the gorge to Ronda. The train cost 15 euro each for a return and took 1hr. The train ride itself was very nice, I had always wanted to go through the gorge on the train after walking along the tracks so many times! The other side of the gorge the scenery changes dramatically, mountains give way to rolling hills and flat planes. Many solar PV farms and wind turbines flash by. Ronda is a beautiful little old walled town with some stunning cliffs. We walked to the old section of the town, got lost on narrow cobbled streets and ate some tasty tapas in Restaurante Bodega