After a soggy run and a festive dip in Llyn Padarn on Christmas morning we started driving (no trains on Christmas day!) to London in preparation to catch an early train on Boxing Day, our destination the southern Italian island of Sicily. Our exit from the apocoliptic rain was just in the nick of time, hours after we drove along the A55 N.Wales coast expressway the road was closed due to being submerged by floods in places!

December 2015 was the wettest month since records began in North Wales, a sploshing 1000mm fell from the skies, almost double the previous record! An extraordinarily wet and warm month or the effects of climate change? Who knows? Pondering this thought as I boarded the Eurostar I took solace that we had chosen the lowest carbon form of transport* to our destination to luxuriate in the simple pleasure of warm sun and dry rock.

The train journey is Sicily is rather exciting, it’s possible to ride the train directly from mainland Italy to Sicily, that’s right THE TRAIN RIDES THE FERRY! After being super excited about this transportation trivia It turns out I was not excited enough to wake up at 3am on the outward journey to experience it! However on the return journey we did very much enjoy a glorious ferry train ride sunset up on the top deck.

When researching climbing possibilities in Sicily the first thing I realised was that Sicily is actually rather large; It would take over 8hrs to drive from one end of the island to the other! My research concluded that there’s good climbing to be had (in various states of development) all over the island, however the location with the highest concentration of high quality well developed climbing is in San Vito Lo Copo, a spit of land in the NW corner of the island. In the summer months San Vito is a top Sicily beach destination, however off season during the winter months when the temperatures are perfect from climbing (15 - 21 deg C during our visit) the area is a fantastic base for rock climbing. Our guidebook Sicily-Rock No5 by Gabro-Verlag showed a total of 980 routes (and some big multi pitch) between 4a-9a all within a walk or less than 20min drive from San Vito. We got the train to Palermo then hired a (tiny!) car for the 2hr drive to San Vito, even though many crags can be accessed on foot many of the best crags require a car and sometimes some off road driving commitment!

Most of the crag development of San Vito has happened in the last 10 years. Before visiting I had heard some horror stories of the wrong type of bolts being using and quickly rusting, however I’m happy to report the couple of crags effected (e.g. Lost Word) have been rebolted. For up to date info I highly recommend the YMCA Climbing Shop / Cafe/ Bar, THE meeting point for climbers and mountain bikers in San Vito with great coffee, beer and free WiFi. Most of the climbing around San Vito is single pitch on top quality rock and tufas however there are several long multi pitch routes with much potential for development. Maybe understandably given the recently development nature of the climbing around San Vito the grades can be very variable between the crags.

Here are a few photo highlights from the trip: 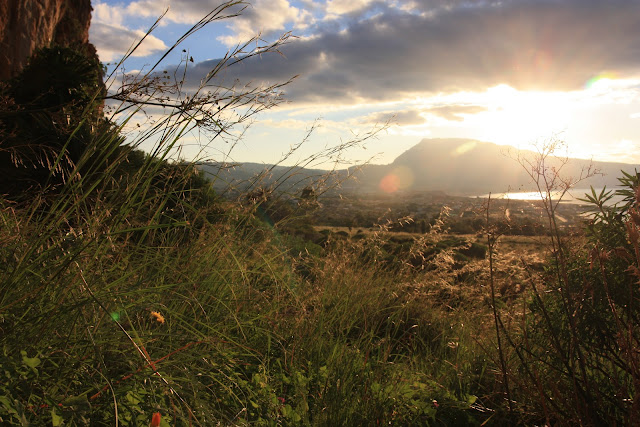 Here are routes we climbed from my UKC logbook, I tried to leave useful comments on some of them :-)