After a few days in the big city of Shenzhen my friend Toby drove Amy and I 6hrs north west to the most famous climbing area in China: Yangshuo. I had first head of Yangshuo when some friends visited a few years ago, I remember being shown some photos of amazing limestone arches and towers and thinking: wow, that looks like an unique place to climb. It just so happens that Toby grew up on a farm in a small town close to Yangshuo, like many people in China he moved to the rapidly expanding cities to find better paid work.

Yangshuo is a very picturesque place, it’s unique landscape of limestone towers has even made its way onto the front every 20 RMB Chinese bank note currency. As a result Yangshuo has become a growing tourist hotspot. I had been looking forward very much to travelling to Yangshuo to leave the big cities behind, experience the countryside and of course do lots of rock climbing! 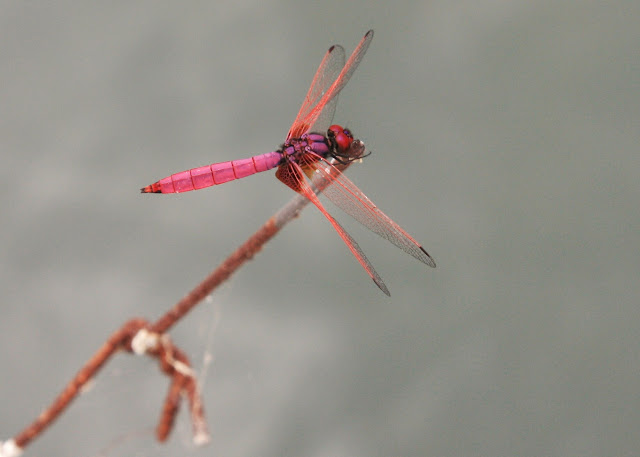 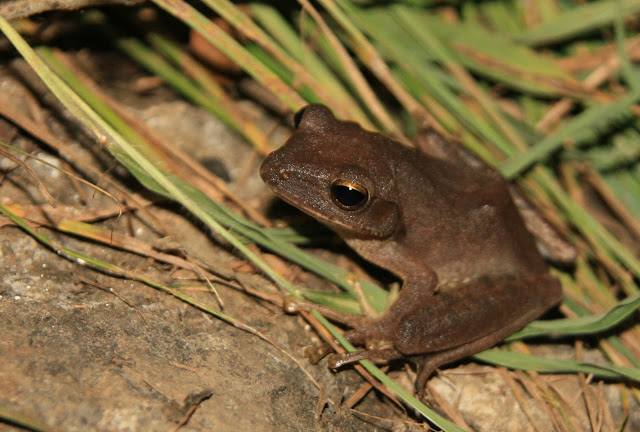 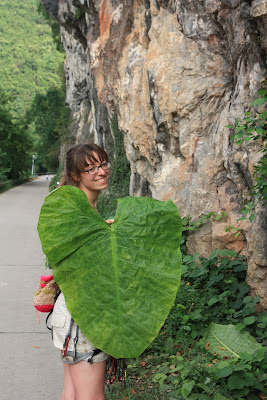 Arriving in Yangshuo late one evening was an onslaught to the senses, on one hand it was exciting to arrive in such a vibrant and happening town, but it was a bit of a shock that the town was bigger and a lot busier than we expected! However there was certainly plenty of evening entertainment. On the first night I met up with an old friend of mine who has migrated from Wales to live in Yangshuo, he now has a Chinese wife and two young children! It was great to meet up with him and his friends on the first night and enjoy a super tasty Chinese vegetarian meal laid on for a friend’s birthday. I'm happy to confirm that as well as learning mandarin yes he can still speak welsh and is teaching welsh and mandarin to his daughter, an unique combo!

On the first night we made the mistake of staying in a hostel right in the centre of town, I am used to quiet surroundings at night therefore trying to sleep in a bamboo leaf constructed building sandwiched between a couple of nightclubs did not go down too well! Day two we took swift actions to improve the situation, by mid afternoon we smugly headed out to go climbing after successfully hiring an electric scooter (THE way to get around in China!), bought a rope, climbing guide book and moved to a hostel a little out of town in a quiet suburb, perfect :-). With personal transportation and sleeping bliss restored we enjoyed 9 days of great climbing and exploring the countryside. We soon got to know a happy bunch of local climbers and felt at home in Yangshuo.

Equipped with our electric scooter it was easy to get out of the town to visit the crags all within electric scooter range. I was seriously impressed with the little electric scooter we rented, loaded up with two of us and all or climbing gear acceleration was rapid and the scooter would cruise at a limited top speed of 45/50 Km/hr with a range of about 50 Km, it would even manage modest hills. In China these scooters can be purchased for about £250, coupled with a near zero running cost makes them a totally economic and environmentally friendly way to get around. It felt fantastic to have travelled all the way to China via train emitting a fraction of the carbon emissions of flying and now be travelling around using an electric scooter :-). I've now decided that maybe I should try and get one to use back home in Wales!


Although my trip to China was not motivated solely by climbing (as are most of my trips!), I was certainly excited to stretch my climbing arms after several weeks of sitting on trains. As usual, I was not as unfit as I thought I might be, sometimes a bit of rest can be a good thing, my elbow tendinitis seems to have improved a lot. Since my time climbing was limited I spent my time in Yangshuo visiting as many different crags as possible and trying routes onsight or first redpoint (if needs must!).

Probably the most famous and picturesque climbing location in Yangshuo is the breathtaking natural arch of Moon Hill. Sadly this crag located in a popular tourist national park has suffered from access issues plagued by climbers avoiding paying the modest admission fee in the past (as far as I could tell chatting with local climbers). However it seems at present that climbing is 'tolerated', by well behaved climbers who pay the fee. It felt an amazing privilege to climb on such an amazing natural feature. Sadly some of the routes seem to have been recently re-bolted badly (maybe even dangerously), I have never seen a new expansion bolt pulled out so far as on the route Red Dragon, and a few of the lower bolts are missing on routes to deter climbing. The bolting situation made me back off the classic route Red Dragon that I really wanted to climb. However it was still a great experience to climb some other routes and experience close up this amazing rock formation.

It took sometime to get used to the climbing conditions in Yangshuo, when we visited in September temperature was in the mid 30's every day and very humidity. This resulted in feeling like showering in your own sweat after about the first 10m of climbing! For best climbing conditions it would be best to visit Yangshuo from October-February.

Crag highlights from the trip include:

White Mountain: A very impressive crag, but being south facing climbing and the predominantly sloping holds was almost impossible on all but the most cloudy of days this time of year. Highlight for me was climbing the polished but very good (and long!) Hotel Yangshuo 7b+.


Riverside: A good easily accessible crag with all day shade. Climbing highlight of the trip for me was sweating my way up Fat Monkeys 7c+ onsight by the skin of my teeth. This long route was totally amazing, it felt like a proper adventure questing up into unknown ground with 14 quick draws and hoping for the best! The line of the route is quite devious and not visible from the ground, the climbing featured everything from brutal roof pulling, gymnastic splits in a frictionless corner grove then tufa wrestling to finish on glory jugs :-D


Spearhead: We visited this newly developed crag on the last day of the trip, it's a bit of a way from the centre of Yangshuo (10 Km) and there are only 7 routes at present. However this crag has a lot going for it, it's set in a beautiful rural location with almost all day shade and 7 fantastic routes. Almost every route on this crag was two or three star. There is a good spread of grades from 6a-8a. Highlight for me was the amazing long flow stone route of Jin Yin Bao 6b+, the sustained Ssssss 7a+ and Jian Tou 8a and making the second ascent of a  Jian Tou 7c+/8a. It is tradition in China to celebrate Mid Autumn day, it is a harvest festival which is traditionally spent with family, many people in China make the long journey back to their family home in the country to spend the day with family. Gifts such as Moon Cake and in seasonal fruit are given to family and valued customers and clients. Last year Toby surprised me by sending me a big box of Mooncake to my office in the UK. Moon Cake is quite different to cake we often indulge in the UK, it often contains a whole egg yolk to symbolise a full moon and is totally round to symbolise harmony. Sometimes nuts and, even stranger, meat is used as Moon Cake filling. After enjoying the nut and lotus seed paste Mooncake that Toby sent me last year I was fascinated with Chinese Mid Autumn day festival, therefore I jumped at the opportunity when Toby suggested that I timed my visit to China to coincide with the festival when he would make the journey back home to the country, I could travel with him and meet his family.


After a week's climbing I met back up with Toby and he drove us to his family home in the city of Liuzhou to celebrate Mid Autumn day. It was an amazing experience to meet Toby's mother, brother, sister in law, nephews and finance. The family was very welcoming, his brother gave us a tour of a his new factory which he has recently constructed with some friends building industrial mixing equipment. It was fascinating to see the rapid development of China first hand, it's astounding to think that only one or or two generations ago China was a very different place, a much poorer farming community. Toby's family was keen that Amy and I lent a hand cooking a traditional Chinese meal. We gladly got involved making dumplings, stuffed tofu and courgettes for a Mid Autumn feast washed down with 8 year old 52% Chinese 'Wine'! In the evening we shared Moon Cake, drank green tea and went on a boat ride down the river under a full moon. The LED illumination of the city at night were very impressive.

After a couple of days in Liuzhou Toby drove us back to Shenzhen ready to get the train to Hong Kong in the morning to catch our flight home. Since our flight was in the evening we had half a day to walk around Hong Kong. We made a beeline for a high point on a mountain above the city which gave us some great views and stretched our legs. I very much enjoyed our brief visit to Hong Kong, it's a very interesting city surrounded by mountain. After mainland China being in Hong Kong felt like a very different place, much more Westernised and similar to London. Not only do they drive on the left in Hong Kong even the plug sockets and car number plates are the same as in the UK and English is commonly spoken and all signs are bilingual English / Cantonese.

Due to time constraints we sadly opted to fly home from China, this was one part of trip I was not particularly looking forward to. To break up the flight we stopped off in Dubai and stayed with Amy’s cousin who lives there. Dubai has never been on my radar of places I'm particularly keen to visit, however I jumped at the idea of not having to fly constantly for 15hrs! I have to admit the city did look rather impressive lit up as we flew over to land at night. The 828m tall Burj Khalifa skyscraper which is the tallest building in the world is very impressive feat of engineering.

Exploring in daylight the city was as I expected very new, consumerist and lacking soul or much care for the environment. Even in October it was savagely hot in the 40 degree sun making it impossible to do much outdoor activity; living in Dubai generally means moving from one air conditioned environment to another as quickly as possible! It was interesting to explore the old trade parts of the city  area around ‘The Creek’, here we took a water taxi across the Creek for £0.18! This was not a tourist boat ride, rather a practical way to get across the water.


Before our flight the next morning Amy’s cousin  drove us about 30 min out of the city into into the desert, it does not take long to leave the city behind. Amy and I had never seen proper desert before. I had a great time taking photos, the patterns in the sand and shape of the dunes where very beautiful, reminding me of snow covered hills in winter, but a bit warmer! 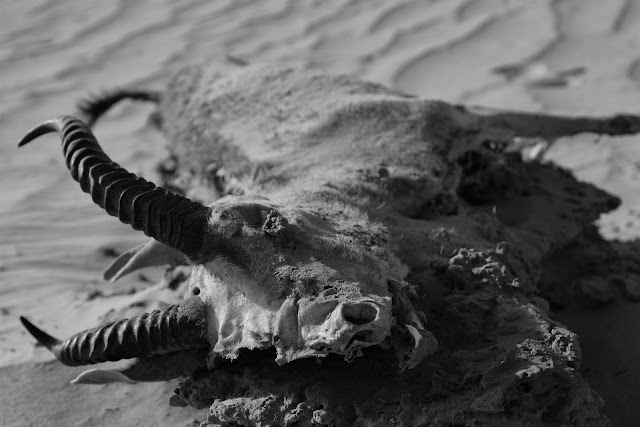 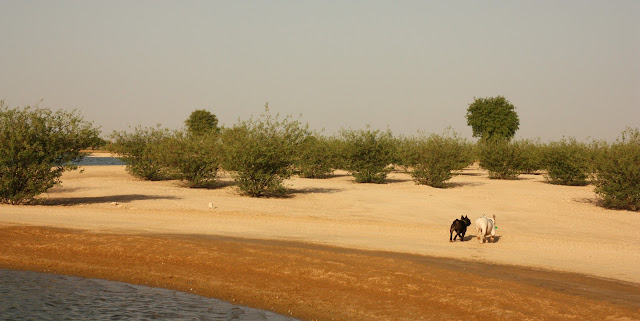 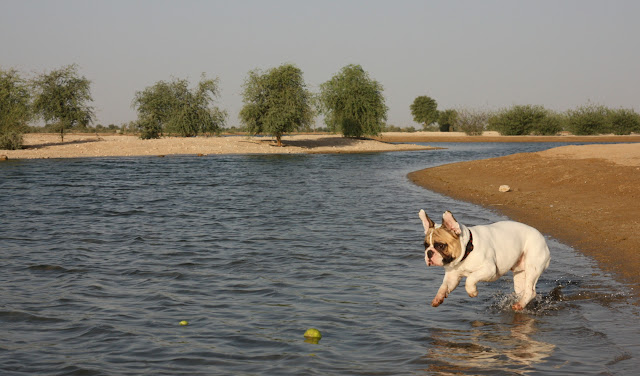 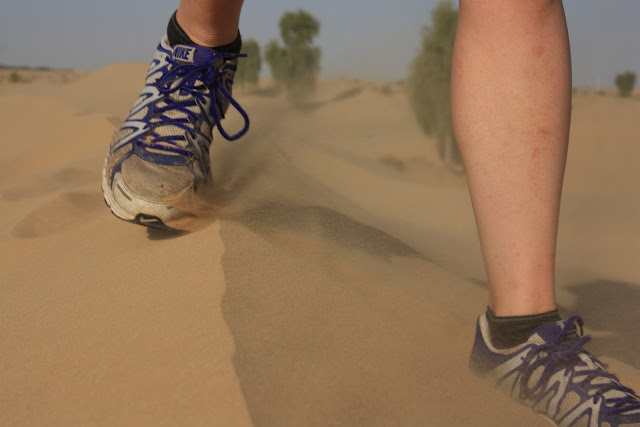