Part 2/3: Siberia to China (via Mongolia) by Train

Krasnoyarsk in Siberia to Yangshuo in China via Mongolia 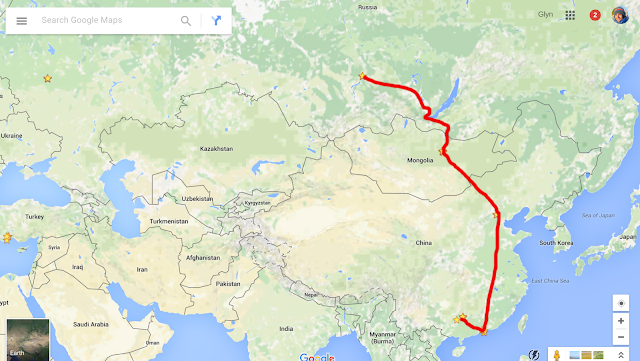 After another two nights on the Trans Siberian train from Krasnoyarsk in Siberia we arrived in the capital of Mongolia, Ulaanbaatar. This time we were lucky enough (by chance) to ride on one of the more modern locomotives. We had a cabin which slept four which we shared on the second day with a friendly young Australian trainee doctor destined to work a placement in a remote hospital in Mongolia. Our cabin even had it’s own TV, not that we could understand anything!


I had been looking forward very much to arriving in Mongolia. It’s one of the most sparsely populated countries in the world, I had seen photos of sweeping green hills, snow capped peaks and families living in tents called gers with horses outside. Unfortunately we were arriving into Ulaanbaatar the capital and by far the largest city in Mongolia with 1.2 million people, 60% of which live in unofficial gers and rough buildings around the fringes of the city. Pollution is a big problem in the city, in the winter particulate pollution levels can rise to 70-85 times higher than recommended by World Health Organisation. One of the main contributions to the pollution problem we were told was the gers using primitive coal burning stoves. Even in summer time, when we visited, high air pollution was very noticeable.

Large roads (4 lanes +) criss-cross everywhere in the city, crossing roads was a scary experience as even when it was a green light for pedestrians cars could still turn into you! It was noticeable how many old vehicles and trucks there were were on the roads spewing out thick acrid diesel smoke, contributing to the air pollution problem. However it was clear that significant efforts are being made to try and improve the situation, all taxies and many newer cars in the city where hybrid Toyota Prius’s and most tower blocks in the city where heated by a district heating main from one of the three CHP (Combined Heat and Power) coal fired power stations on the outskirts of the city.

In Ulaanbaatar we had arranged to stay in an AirBnB with a Mongolian family, the room was located on the 9th floor of an old town block in the west of the city. After a 5Km walk dragging our bags along a rough and sometimes non existent pavement and a heavy haul to the 9th floor (lift was out of action) we were welcomed into a lovely little flat and our room with a small comfy sofa-bed and a fantastic view overlooking the city. Three generations of the same family lived in the flat, our host Masha was very welcoming and chatty with fantastic English, none of the other family members could speak any English.

After a week and a half of sitting on trains and being in cities we were very keen to get out of the city and explore the Mongolian countryside. We took a bus 1hr south to Zuunmod then a taxi up to an old temple in the hills where we could then walk up and over the top of Tsetsee Gun 2256m and back to the city. It did not take long on the bus to leave the city behind; within 15min we were clattering along a dirt road with green grass, cows, gers, horses and mountains all around. Walking up through dense forest to the summit of Tsetsee Gun was a fantastic experience. There were no tourists, just a few local people out collecting pine cones to extract pine-nuts and berries. The foragers, although obviously very poor seemed happy, we were handed a handful of pine-nuts as we passed by. Extracting the pine-nut from its hard shell required a technique I never really mastered! I guess the manual collection process and difficulty of extracting the kernel contributes to the high cost of these nuts when we purchase them to make pesto pine-nut pasta in the West.

It did not take us long to reach the summit of Tsetsee Gun at 2256m since the city of Ulaanbaatar is already at 1350m. We had expected to walk back to Ulaanbaatar via rolling hills, however what we found on the north side of the mountain was more dense forest with no sign of any path. Armed with OpenStreetmap on my phone which showed a faint path starting lower in the valley we quested off breaking trail into the forest/jungle. It was tough going, our progress was slow. For the first couple of hours we saw nothing apart from dense undergrowth, it would have been easy to get disorientated! Now committed, Amy did not help the situation by reminding me that she had read that these forests still are home to many wild wolfs! I thought it would be unlikely we would meet a wolf, however I have to admit I did flinch when a large deer jumped out of the undergrowth close in front of us! After a few hours of bashing we did manage to find a faint path, probably used by the local foragers which eventually lead out onto a ski piste and then a posh golf course, quite a contrast! In the winter the altitude of the city gives great skiing.


After another day exploring the city we got back on the Trans Siberian Train for the final leg of our trans-siberian/mongolian journey from Ulaanbaatar to Beijing the capital of China. By far the highlight of this train ride was seeing a camel out of the train window!

In Beijing we met up with our friend Jenny, a Beijing local who me met while she was studying abroad in Warwick University in the UK. It felt amazing to have made it all the way to China via overland travel! After a tasty Chinese lunch and a walk around the crowded city Jenny navigated us across town on the metro and welcomed us into her lovely flat. The next day we headed out to explore a remote old part of the Great Wall which has not been restored. I was most excited to see the wall in its original state, it felt quite adventurous climbing carefully up steep ruined steps and crawling through crumbling arches! It’s impossible not to be impressed by the Great Wall. The feat of building such a structure with only man power is very impressive, surrounding the wall was dense forest. Even walking up to the wall fresh from an air conditioned car was quite hard work in the heat.

The next day we caught a fast train to take us all the way across China to the city of Shenzhen in the south of China. This was no ordinary train, it was to take only 8hrs to travel across the whole country. Cruising at a smooth 307 Km/hr, I was glued to the window watching countryside and cities larger than London that I had not heard of fly by. I was aware that China is home to many, many people however this was really evident looking out the window watching huge cities and row upon row of skyscrapers fly by. In every town and city it seemed many more tower blocks where in the process of being built. The train journey also passed through more remote areas growing rice and fruits. In Shenzhen we were met by my friend Toby. Shenzhen and the nearby city of Guangzhou are known as the ‘factory of the world’, it is almost certain that the laptop/tablet/phone you are using to read this was made in factories in these cities. I have worked with Toby for the last 3-4 years, he helps me source electronic components in Shenzhen and organise manufacture and shipping. I try and do as much manufactured locally in the UK, however many electronic components are manufactured solely in China. I have got to know Toby well with regular emails and Skype contact. It was fantastic to meet him in person. Toby was very excited to meet me in China and keen to show me around his country.

In Shenzhen Toby took us to visit a couple of factories which supply me with electronic components. Toby also showed us round the largest electronic market in the world, it was quite an experience! See my post on OpenEnergyMonitor blog about our time in Shenzhen.


Even though Toby lives and works in Shenzhen (for many years as an English teacher).
he (like many other people in this part of China) had moved to the city for work. His home town is near Yangshuo, a beautiful area famous for its limestone towers which in recent years have been developed to give fantastic climbing. I was very keen to visit Yangshuo, Toby drove us 6hrs to the NW from Shenzhen to Yangshuo.

I am currently writing this looking out at misty limestone towers in a very wet Yangshuo, so far we have had a couple of days of great climbing and exploring the area. We are here for another 5 days before Toby comes to pick us up and take us to his family home to celebrate the Chinese Mid Autumn Day festival. Looking forward very much! Blog post part 3/3 awaits....