Part 1/3: Bangor to Siberia via train

Part 1/3: Bangor to Siberia via train


The idea for the trip formed after a conversation with a friend who mentioned she'd met some people who had cycled to China. It sparked a realisation that although it would be an very long journey, it's totally feasible to reach China overland via train. While not being as fast as flying (but faster than cycling), train travel requires far less energy and emits significantly less carbon*. I have always wanted to meet a colleague who I work with in southern China and I would love to go climbing in Yangshuo. My partner Amy was really keen because she had always wanted to explore Russia...epic planning and train scheduling commenced!

And so we find ourselves 80hrs into a 144hr train journey from Moscow heading east across Siberia to Beijing. White trunked birch trees scroll past outside the window interspersed with small hamlets of log cabins with smokey chimneys. We share our open sleeper carriage with 54 others, mainly Russians. The monotony is broken by 20min stops in larger stations giving a welcome opportunity to stretch our legs walking up and down the platform and surveying various home grown / cooked food from Babushkas (Russian women who are street sellers). On one stop we bought some plums, cowberries, (unfortunately mouldy) strawberries and a rather nice whole smoked fish (presumed from Lake Baikal). 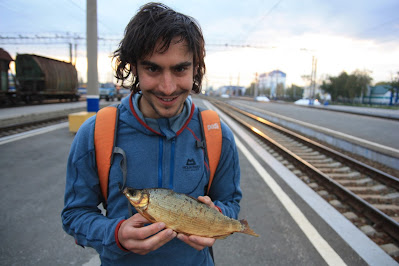 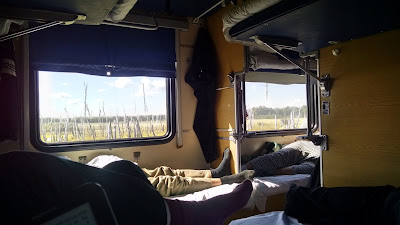 We boarded the Trans Siberian train in Moscow after two nights on fast efficient sleeper trains across Europe (London > Brussels > Cologne > Warsaw). We were pleasantly surprised with how nice Warsaw was; situated on the bank of a large river with plenty of sunshine, greenery, large parks and interesting buildings. Aware of the sedentary few days that lay ahead of us we enjoyed running 10k around the city.

The sleeper train to Moscow was particularly memorable. After a tense exchange of passports and visas on the boarder with Belarus the train then proceeded into a warehouse where in turn each carriage was raised into the air with its occupants still on board and its wheels changed to equip the train for its onwards travel on the wider Russian gauge tracks. After a dinner of left-over salad and oatcakes I went on the search for some hot water to make some tea. Moving between the carriages in search of a beverage serving carriage was quite a hairy experience as care must be taken not to lose a flippy-floppy (or toe) down the gap onto the rails flying past below! However this was only preparation for what (or lack of!) awaited me. Casually opening yet another door, I was suddenly confronted by space, with the rear end of the locomotive pulling us along a few meters away from me! With the help of another passenger we managed to wrestle closed the door against the inrush of cold night air. Tail between my legs, I retraced my steps back to our carriage and reported back to Amy that hot water was not available tonight!


We had a 24hr stop in Moscow, long enough to see the sights, get lost on the impressive marble paved metro and drink some ice cold vodka! In Moscow we boarded the Trans Siberian Express train destined for Beijing via Mongolia. To break up the journey (and maintain sanity!) after a crowded 72 hours we stopped off in Krasnoyarsk in Siberia. 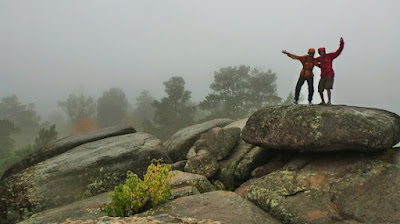 In Krasnoyarsk keen to stretch our legs we walked up to explore Stolby National Park to take a look at the impressive granite towers in the forest, a bit like a granite version of Fontainebleau...with Chipmunks! The local ethic is bare-foot solo climbing with head first descents! Sadly the weather was a bit Welsh so we didn't do any climbing. The quality of the rock was fantastic. 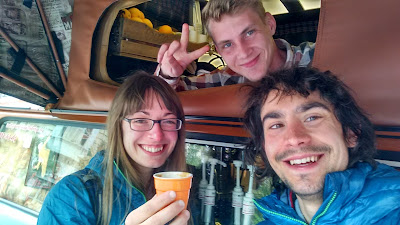 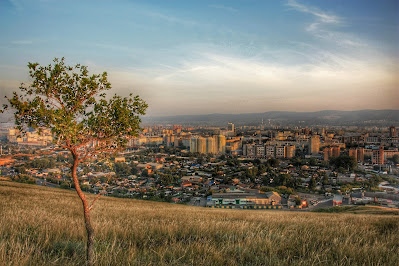 Next stop Ulaanbaatar the capital city of Mongolia!....

The international 'safe' level of emissions per person is around 2T/yr to contain global temperature changes at or below 2 deg C which will 'hopefully' keep runway climate change and subsequent rise in sea levels at bay. Return fight from London to Málaga will emit 2/3T of carbon per person