Wales has been THE place to be this weekend and the beginning of this week, with the hottest November temperature on record a whooping 22.4 deg C being recording in mid-wales. We basked in gorgeous sunshine while the rest of the UK was blanketed in fog grounding aeroplanes. While other people's jetset holidays were being disrupted (they should have taken the train..), we went out to play in the sun. I have to admit, while being very much welcome, the hot temperatures caught me off guard. I planned a winters day out bouldering on a day that we could easily have been tops-off in the pass! Anyways a great couple of top-off-for-power bouldering days were had. Autumn must be the prettiest season, the colours of the leaves on the trees this year are spectacular.

On Sunday we headed out to explore the bouldering around Bleunu Ffestiniog, somewhere I had not been before. There are some good free topos to be found on the excellent Hongian (hanging in Welsh) website. There were some great problems to be had, the highlight was the prestine arête of The Tempest 7a (the chalked arête left of Jon in the photo below).

On Monday I smashed out a few hours work in the morning then headed out into the sunshine to explore the Rhiw Goch boulders near Dolwyddelan, another bouldering spot I had not been to before. After a bit of thrashing around in the bracken we found the boulder. While only really being one boulder at the venue, it was a very cool boulder with a number of powerful problems finishing with exciting slaps for the lip then a mantel top out. The highlight for me was the awesome hanging arête of Moria 7b.

Here are a few photos from last weekend where we visited a newly developed yet to be revealed area....! 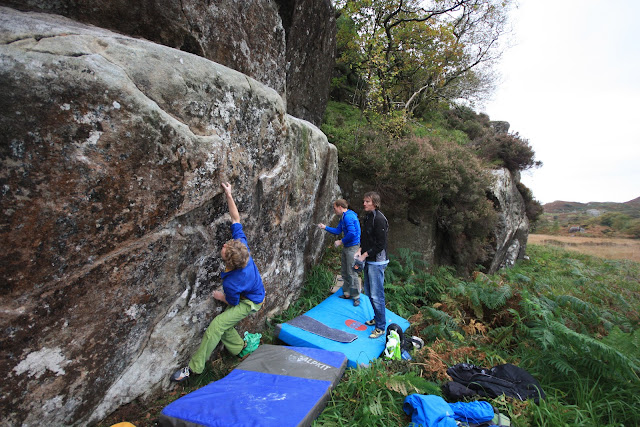