I have never been on what many people would consider to be a 'summer holiday' sun, sea, sand...ect. I have always been on some sort of climbing trip. The plan after the Ecrins was to head south to warmer climates for a bit of relaxation...and also some more climbing! I don't think I would enjoy laying on a beach all day anyway!

We drove down to the Calanques region near Marseille. The Calangues region is an un-developed area of limestone cliffs between Marseille and the tourist town of Cassis. 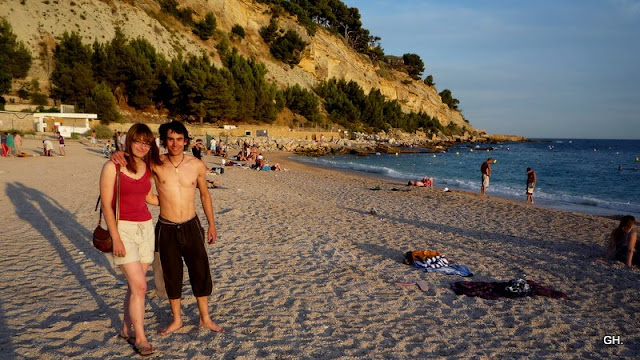 Straight to the Cassis beach after 5hrs of driving..well worth it!
Stormy Weather Over Cassis
I was psyched to visit the super steep cave of Saint Michel in Les Goudes. It did not disappoint. The cave was an amazing place. While in the cave we were lucky enough to experience a sound wave phenomenon. The cave acted like a giant ear, collecting and amplifying the music of a band which was playing in town. The result was quite amazing.


On the first day I onsighted a fantastic 7a+ called Batida Nossa. I then got on the super steep route of Le Denti 8a going over the steepest past of the cave. I got up it after sever rests. The moves and positions were amazing but unfortunately the route relied heavily on glue on holds and drilled pockets. I decided not to spend too much time on it. After a few failed redpoint attempts I stripped it and chilled out for the rest of the trip.
Lowering off pumped and tiered after Le Denti
I had in the back of my mind that it would be cool to climb an 8a outside on this trip, having previously climbed that grade indoors. Although in retrospect trying to combine hard sport climbing with alpine climbing was always going to be difficult. I felt like I was lacking in stamina after a few weeks of doing more walking than than pulling on small holds.


Amy near the top of multipitch in Les Goudes
One of the highlights of the trip for me was discovering deep water soloing. One day we hired a sea kayak and paddled around the Calanques. The possibilities for deep water soloing are endless, I was blow away by the amount of rock which was around. We paddled round to a small cove called En Vau which was very beautiful. I did some deep water solo climbing while Amy bobbed around in her rubber ring and Trystan kayaked about. Deep water soloing is great fun, no ropes, no partner no faffing just pure climbing. 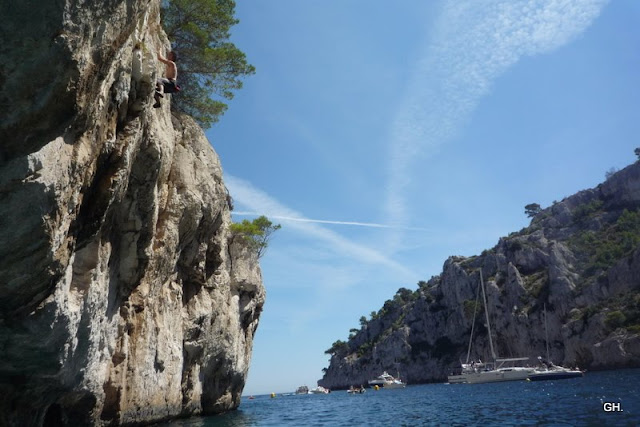 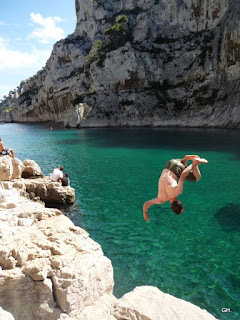 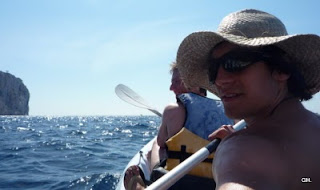