Next stop on the alpine van tour was the small village of Ailefroide near Briancon high in the Ecrins. The drive from Chamonix to the Ecrins took about 5hrs and was awesome. We drove over Col du Galibier 2642m! It is probably safe to say that that is the highest altitude the van will probably ever get to!

After a short detour to check out La Grave we arrived in Ailefroide just as it was getting dark. We found a great little bivi spot above the village. The next day we checked the weather forecast while eating a pain au chocolat. The forecast was for at least three days of unbroken alpine sunshine. After two weeks of genrally being rained on in Chamonix I got pretty excited. We decided on an objective of Dome De Neige Des Ecrins 4015m, a subsidiary peek of Barre Des Ecrins, the highest mountain in the Ecrins. 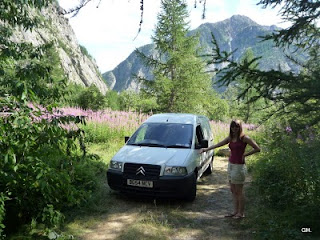 Great bivi spot in Ailefroide
That afternoon after an epic gear faff session we walked up to Refuge du Glacier Blanc, carrying with us food for three days. I had discovered in Chamonix that refuges are actually very cheap (£3-4 a night) if you take your own food. At 4am the next morning we set off to climb Pic du Glacier d'Arsine 3527m to acclimatise.
Panorama view from summit of Pic du Glacier d'Arsine 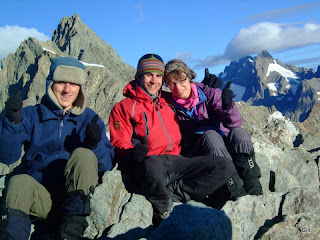 Team on summit of Pic du Glacier d'Arsine
After a short time on the summit we descended to the higher hut, Refuge Des Ecrins where it was nap time. Later on a game of chess, reading an old Economist (the only non-French reading material in the hut) and a large amount of Pesto Pasta was enjoyed. 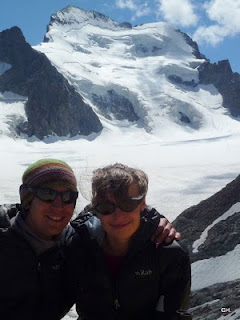 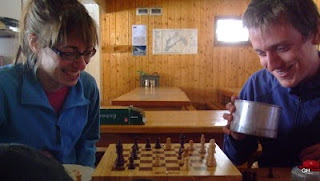 Amy and Trystan engaged in competitive post pasta chess in Refuge Des Ecrins
The next morning we woke up at 2:30am and were walking across the glacier towards Dome De Neige Des Ecrins soon after 3am. I have never been a fan of getting up early but somehow early alpine starts add to the excitement. Early starts are needed to ensure the snow is still frozen, minimizing the risk of snow bridge/serac collapse and hopefully giving good névé which crampons securely bite into. Early starts have the added bonus of being up high at sunrise which is often breathtaking.
The ascent was largely straight forward. Crossing a serac with an aluminium ladder (presumably left by guides) added some excitement. 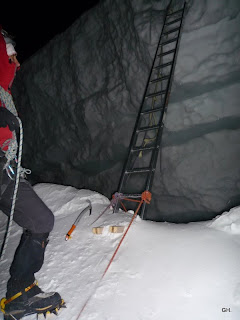 Myself contemplating an early morning serac crossing
On this occasion the sunrise did not disappoint.
Trystan and Amy high on Dome Neige Des Ecrins 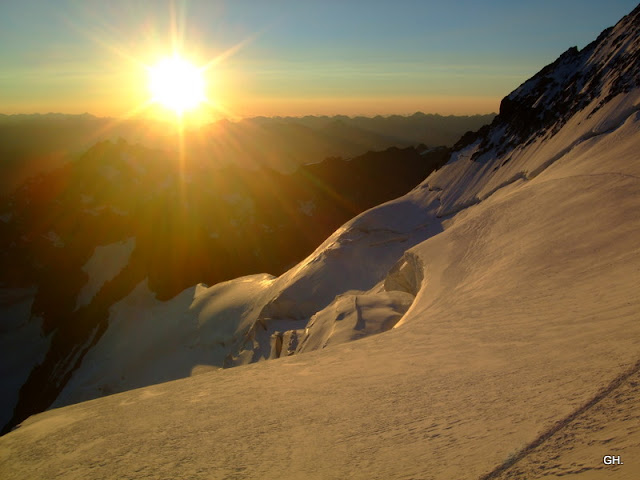 Sunrise high on Dome Neige Des Ecrins
The rest of our time in the Ecrins was spent rock climbing. We spent a couple of days sport climbing at  Tournoux up at Col de la Pousterie high on the hillside S.E of Vallouise. A very beautiful place.
Amy climbing in Tournoux 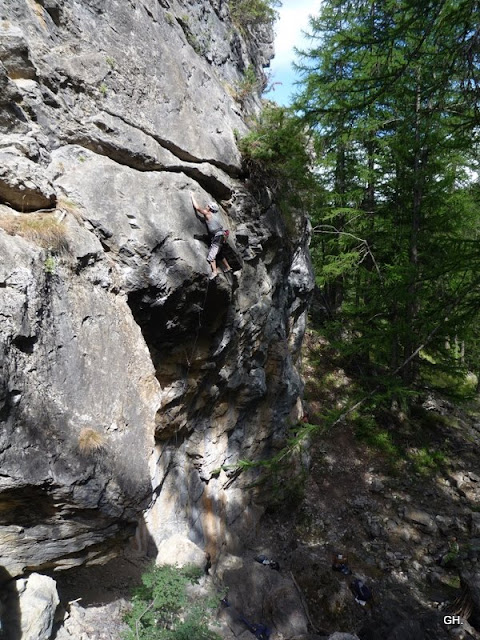 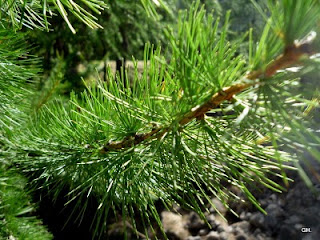 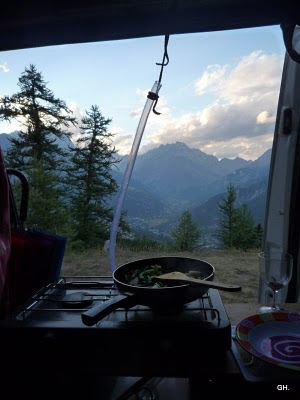 Stunning view from van cooker
Can bivi spots get any better?
On the last day we climbed a long multipitch route in Ailefroide. 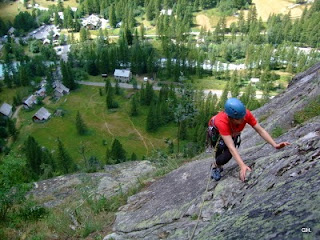