Chuilla Spain via Electric Campervan in time for Christmas

Rather bizarrely our Christmas holiday hit the local news! Myself, my partner and our dog traveled to a famous climbing area called Chulilla near Valencia in Spain over the festive period. What caught the attention of the Daily Post is that we travelled there and back in our electric van. It’s a second hand Nissan e-NV200 with a 24kWh battery that we have converted into a camper. This was the 3rd road trip we’ve done in Europe since converting it. 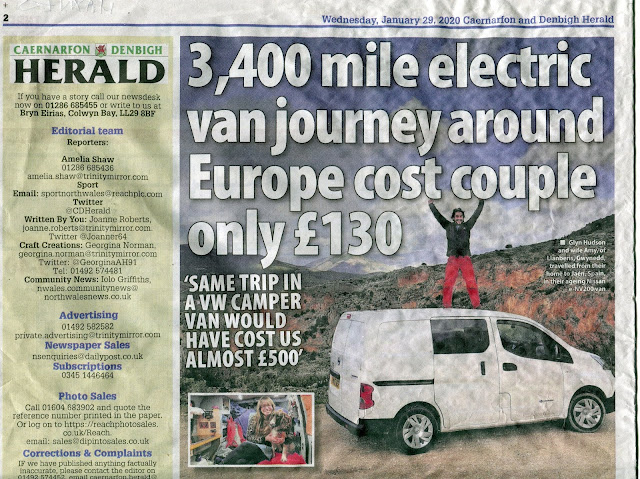 Our van is an early Nissan e-NV200 model with a small battery (24kWh) compared to new electric vehicles (EVs), which have ranges of 200+ miles (longer than most people’s bladder range!), but the fact that even low range EVs like ours can do long journeys shows how extensive the charging infrastructure in the UK and Europe actually is.

At home a range of 70-80miles is more than enough for our local commutes. We could make the 3500 mile return trip to Spain using rapid chargers, which refill the battery in 20-30mins. We took 4.5 days to do the journey from North Wales to Spain, but did it in a leisurely way, taking time to explore along the way, going for runs/walks with the dog and often staying places longer than the time needed for charging! 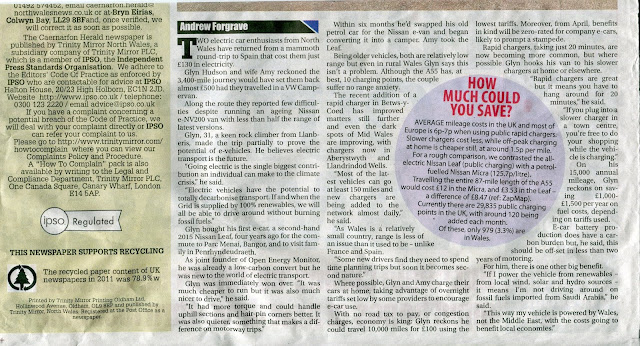 The Daily Post put a focus on cost in their headline. We paid £130 for electricity for the return journey, using the public charging networks. This certainly isn’t bad, but when charging at home on an off-peak tariff the same amount is enough to drive the van 13,000 miles, or more if charging for free from our solar PV!

However, although the low running cost is a bonus, we primarily decided to get an electric vehicle because:

We have a domestic solar PV array at home and are with a green energy provider, but the grid electricity mix is also getting cleaner - National Grid released a statement that 2019 was the cleanest year on record for Britain as, for the first time, the amount of zero carbon power outstripped that from fossil fuels for a full twelve months (48.5% generated by zero carbon sources, compared to 43% generated by fossil fuels).

From a driving point of view, It's really easy and smooth to drive, instant torque, no gears (totally linear acceleration) and regenerative braking that helps slow you down and puts energy back in the battery.

I don't have many photos or videos of climbing since there was mostly only two of us and it's not possible to take any good photos while belaying. However, here's a photo of some slack liners which shows the awesome rock walls of Chulilla which are so good for climbing. 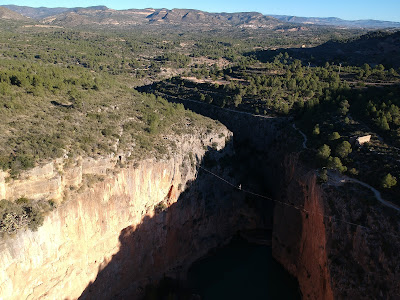 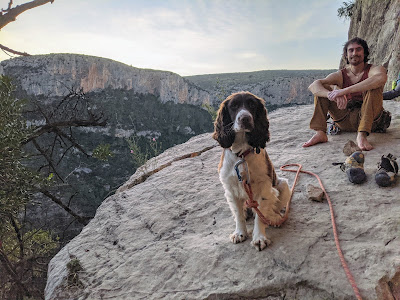 Even though I don't write much about climbing on this blog any more (I find it rather dull to read just climbing blogs!), however I still very much enjoy actually climbing! The climbing in Chulilla is fantastic, the routes often long are technical and interesting.

Three climbing highlights stand out for me:

1. Getting really excited arriving in Chulilla on Christmas eve after 4 days on the road and heading out to go climbing in the dark without any guidebook, I set off up the first route I found. It felt like a good adventure in the dark, 35m later of technical bridging and lay backing I clipped the chains on Super Zeb 7c (I found out the name and grade later!). It was a fantastic experience questing up and unknown route in total darkness apart from my headlamp. Just by coincidence this route was put up by a friend of ours towards the end of my last trip to Chullia (via train in 2014), it was great to climb it as the first route of this trip!

2. I was please to onsight my first 8a El Cachalote, although the grades in Chulilla are a bit soft and the climbing suits me it was still nice to battle really hard and scrape my way up this awesome route.

3. On the last day I climbed Los Caminantes 7c an epic 40m long enormous tufa route, the climbing was interesting all the way but never totally desperate although I find this sort of full body tufa climbing style very tiring! It was a memorable experience, here's a great photo of the route taken from the guidebook: 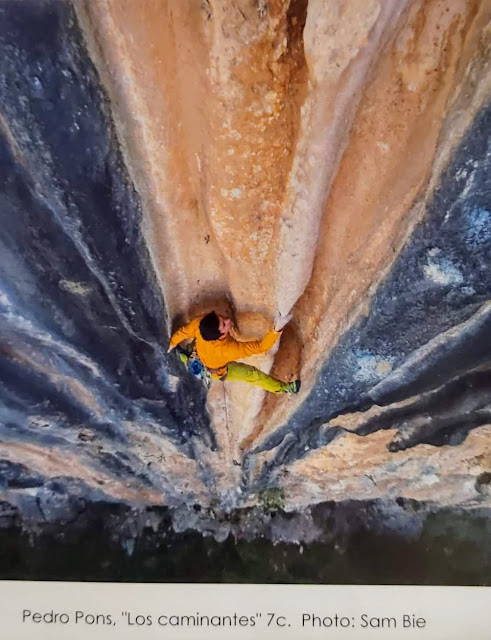 It was also great to hangout with a number of good friends in Chulilla, I love how climbing brings people together.

Here are some video blogs from the trip: 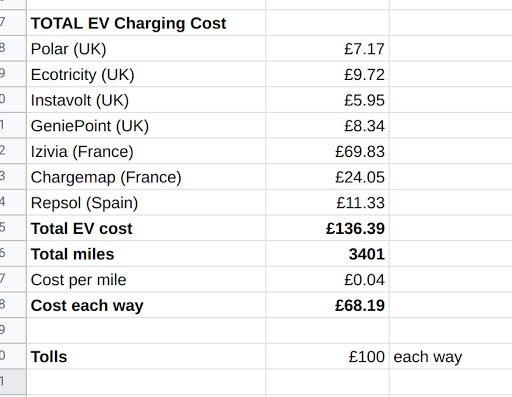 Several people have asked us why who choose to drive all the way to Spain rather than put the van on the ferry from the UK to Spain. The reason for driving all the way is that driving an EV is *much* fewer emissions than putting the van on a ferry. For the same reason why take the EuroTunnel instead of the ferry from UK>France. 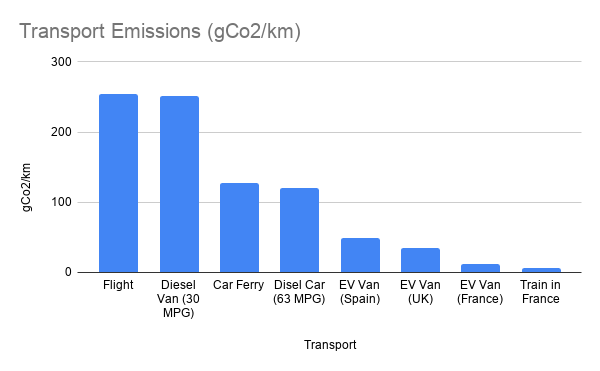 However, if I was driving a diesel van it's only slightly worse to take the ferry, therefore it's probably a good idea, especially as the emissions are out at sea which is better from a local air quality perspective. The van emissions is per vehicle can can be divided by the number of passengers, while the flight emissions are per person and include the aviation multiplier. The reason the EV emissions very between countries is the carbon intensity of the electricity (Co2/kWh) varies depending on the electricity generation mix of the country. In France electricity is mainly generated from nuclear so the carbon emissions are very low. In the UK we get a lot of energy (almost half) from wind power.

These are the figures and sources I used to produce the graph above: