Last weekend I had the honour of support running a couple of legs of the Bob Graham Round for David Fountain. The Bob Graham Round is an epic 106km fell run with 8200m of ascent over 42 mountains in the Lake District! The challenge is to complete the round within 24hrs.


Amy and I accompanied David running the last two legs with him, helping to carry food and water and bring fresh morale to tired legs. Luckily (for us!) by this stage the pace was slow enough for us to keep up! Even so, I think this is the longest and furthest I've ever run; the last two legs totalled 33km with 2200m of ascent which we completed in 7hrs 37mins.

David successfully completed the Round in 23hrs and 24min, which is amazing considering how bad the weather was for the first half! David started running at 4pm on Saturday night after postponing by 22hrs due to horrendous weather, though when he set off the weather was not much better. That night Amy and I got thoroughly soaked walking 500m back to the van from the pub in Keswick! As I lay cosied up in our bed in the van listening to the rain hammer on the tin roof and feeling the van sway with gusts of wind, I thought of David still running over the fells, now 7hrs in!


Our alarm was set for 3am ready for a long drive round to Wasdale where we were due to meet him in the morning. He arrived over an hour late, but not looking too bad considering he had been running for 15hrs through the night in horrendous weather. David later described the night time experience "like being in a dark washing machine on spin cycle!". Amy and I definitely hit lucky, after a bit of rain soon after we set off it was surprisingly dry with almost some sunshine at times. The hours flew by, it was fantastic to cover so much ground in the Lake District where I had not run or walked over before. I tried to keep David distracted by talking a mix of news and rubbish at him while at the same time focused on the task at hand, and constantly feeding him jelly babies, Hula Hoops and energy gels. He had told us to try and force food upon him since after 17hrs of running most people lose their appetite and stop taking on food which usually results in failure. 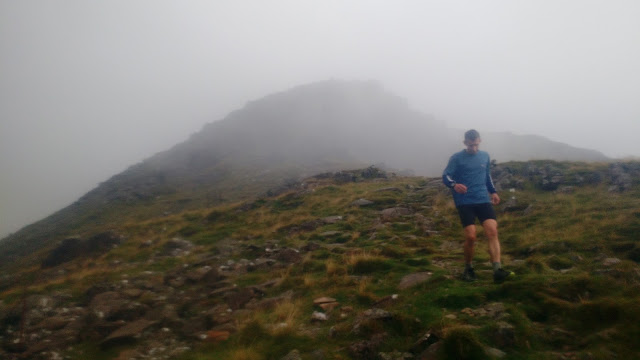 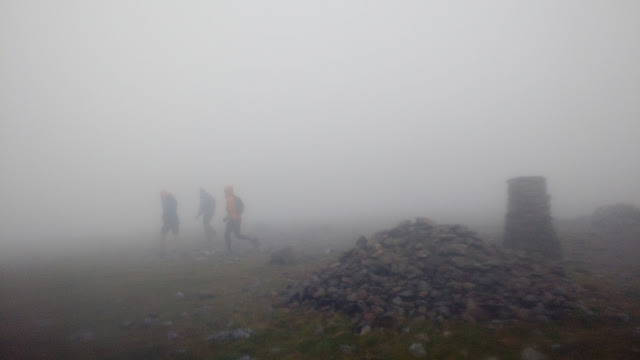 After almost 8hrs of running, we hobbled into Keswick for a well-earned pint :-)


It was an honour to play a small part in David's successful attempt of the Bob Graham Round. I knew it meant a lot to him; soon after I met David in the 1st year of university many years ago he mentioned that one day he would like to complete the round.

After crossing the finish line a few people asked me, "so when will your attempt be?"! While I can see the satisfaction in ultrarunning, I don't think it's for me. I enjoy a fell run, but the training required for an 'ultra run' would require time I would rather spend climbing. Speaking of which I'm currently writing this in the van in Grindelwald, Switzerland after a couple of days of fantastic multi-pitch climbing. I think the alpine start and long day was actually good training for coming here! Luckily though we've had better weather so far. Fingers crossed it will hold!