Little Orme: Shining on The Diamond and and Ocean of Emotion on Detritus Wall

August has been a busy month, lots of lovely people staying in my house meant lots of psyche for climbing!

The Shining 8a - The Diamond

A week or two ago I climbed The Shining 8a 35m on The Diamond, this was one of the best hard long single pitches of sport climbing I've done in the UK. By fortunate circumstances (mainly thanks to Tommy!) I was privileged to be the first to re-climb the route in about 30 years after it was re-bolted at the end of last year. The wall on the right hand side of The Diamond is a very different style to the middle and left of the crag, the wall is gently and unrelentingly overhanging with a bewildering number of blocky and sometimes sloping holds. Even though the route is now well equipped with about 12 or 13 resin bolts is still feels spicy and very exposed. With a bit of Ceuse fitnesses still hanging on in my arms I managed the route first red-point, having to dig-deep fighting the pump on the top section!

I was inspired getting a belay from Emma Twyford after she came very close to sending The Brute, that girl is strong!


The neighbour route on the same wall Wall of Evening Light 7b+ taking the line left of The Shining is also just as good and also feels very 'out-there'! Wait for the golden evening sun to hit the crag for the four star tick.

Ocean Of Emotion 7b+ - Detritus Wall


Yesterday I continued my quest to explore some new areas on the Orme, with an adventure onto Detritus Wall on the Little Orme. Detritus Wall is a wall a little further along than The Diamond and approached from the other side via an amazing 150m roped traverse that was equipped by Pete Harrison in 2011. See post on DMM website for access and info on Pete's new route Alberta Rose which also looks ace.

The roped traverse is an amazing achievement that took Pete over a week of solid effort on his own hanging about on loose bird covered rock. If you ever meet him, buy him a beer! (And donate to the North Wales bolt fund). The in-suite line is starting to show it's age and is covered in bird poo, it will probably need replacing after another winter. The traverse allows 'easy' if very gripping access to the top of a route called Ocean of Emotion 7b+ 30m that I had heard was very good. It did not disappoint. Hard technical climbing on crimps and slopers leaves an atmospheric non-tidal bird poo ledge just above the sea, the rout weaves up the wall to a stunning steep headwall on pockets and cracks. Unfortunately the rock at the top of the route is not great but sold enough to get you to the belay! Best conditions on the wall are in the late afternoon evening when it comes into the sun.

Now for something totally different, a pure slate splitter crack climb in the Lost World in the slate quarry's. Sometimes is good fun to mix things up. It was nice to put this route to rest after failing on it five years ago, it still gave a good fight! It was great fun exploring the slate quarry's on a nice sunny day.

Occasionally I really enjoy an odd fell run. A couple of days ago I had what I think was the best fell run I've ever had. After a morning swim in Llyn Padarn, bike ride to work and a days work in the office I was feeling a little tired trying to motivate myself for the bike ride home when I got a message from Dave asking if I would be keen for a fell run starting from Bethesda in an hr. Looking out the window I could see it was going to be a stunning sunny evening, it would be rude to turn down the opportunity, the challenge was on; Triathlon Tuesday was about to happen! I set off on the 10Km 30min bike ride home home, grabbed my fell running kit and head over to Bethesday. After working hard keeping up with Dave we were rewarded by a stunning sunset and the best fell running descent I've ever had. This is fell-running at it's best, smooth grass underfoot and perfect descent gradient saw us cover 1Km in 4min! 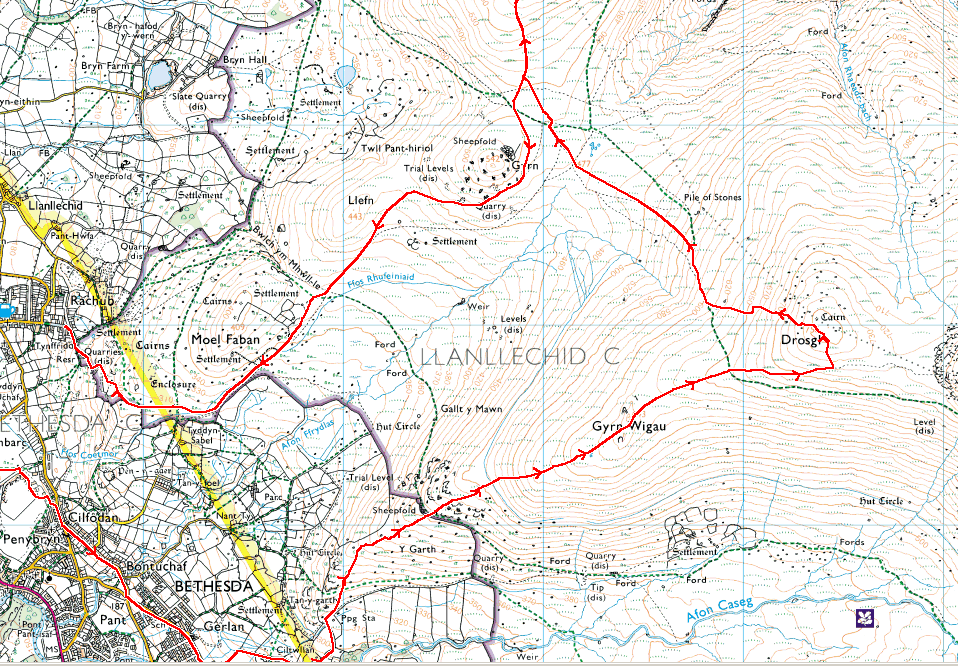 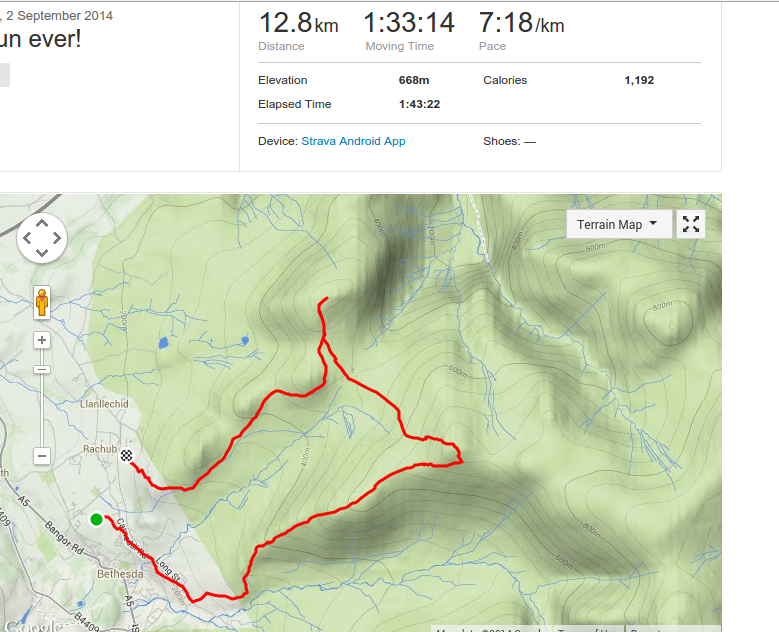