I'm currently sat on the upper deck of a TGV train in cusing along at 185 Km/h across France. I'm returning from a couple weeks of climbing in the South of France.

Over the years I've made similar journeys south in search of warm sun or cold mountains via car, van, coach and plane; in my experience train travel is the most relaxing and pleasant means to travel. The train cost £69 (we booked a couple of months in advance) from London to Avignon and took 5hrs 30min, checkout http://loco2.com/destinations/france/trains-to-avignon for info.

Our plan was to have a couple of weeks climbing at Ceuse (a crag that needs no introduction!). However the weather was unseasonally cold (for end of May), up at Ceuse at 1800m the temperature was not getting above single figures in day and below freezing at night. When we arrived there was even a fresh dusting of snow, not ideal climbing conditions!

So we went for plan B, which was to check out a number of different crags around Avignon featured in the Languedoc-Roussillon and Haute Provence Rockfax guidebooks. We were lucky for the first week to have our friend Vivien with us who's French and parents live near Avignon. After some nice french food and the some of the best red wine I've ever tasted (it was as old as me!) we headed over to a crag called Saynes near the town of Ales. This crag jumped out at us while flicking through the Languedoc-Rousillon Rockfax guide book for having a high concentration of highly stared routes in the harder grades, many on fun looking tufas with a sunny aspect and low altitude. The crag did not disappoint.


We spent a week ticking our way through some great routes. The highlights for me (in no particular order were) :

Le Sphinx 7c+ - super fun bouldery tufa climbing, slightly drilled but still good. Got it done in a day on my 25th birthday. Cheers to Luke for working out the beta.

Peggy La Cochonne 7c – powerful and very sustained tufa climbing, I got up to the lower off on my first redpoint but was too pumped to clip it! Big air time followed since the route was quite run out! Didn't quite get the tick but the experience of the battle was more memorable!

Dinosaure 8a+ - I didn't tick this route or even get the the top of it! But it was probably the coolest and hardest tufa feature I've ever climbed. This perfectly formed soaring tufa feature must be THE line of the crag. It's base is approached by about 20m of 7a+ climbing. I think I only managed about four bolts worth of climbing up the perfect tufa before my tufa pinching power and technique ran out. Even though I got totally shut down on this route it was still an amazing experience to try and climb such an amazing feature.

The only negative point to climbing at Seynes was the fast road below the crag. This would not have been too bad had we not been camping in the car park at the base of the crag. I don't think I slept properly all week, I even bought some ear plugs to try in improve the situation!

For a change of scene for the second week of our trip we headed East from Avignon to checkout Buoux. I had heard a lot about Buoux, it was a popular climbing destination in the 80's but seems to have fallen out of popularity. The crag is set in a beautiful location and gets plenty of sun, the week we were there the temperature was about perfect when it would normally be a bit hot this time of year (end of May). 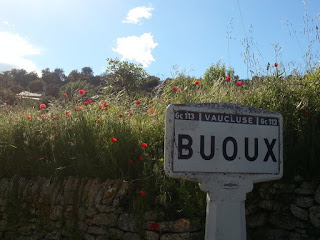 I can understand why the climbing at Buoux is less popular these days; the climbing seemed to range from savage finger pockets with little or no footholds to super thin slab climbing on sharp and shallow mono pockets. Most of the routes were very finger intense, necessitating regular rest days. However there are still many world class routes at Boux, I really enjoyed:

No Man's Land 7b + - A classic pumpy traverse line into steep climbing on pockets and crimps.

Rose de Sables 7a and Courage, Fuyons 7a+ - Two iconic routes climbing either side of the soaring arete. These routes must be THE lines of the crag. The climbing does not disappoint the LH line has some really cool arete heal hook moves while the RH line has a stunning finger crack at the top.

After a few days at Boux our fingers were screaming for a rest, luckily a crag called Venasque which is abut a 40min drive away was the perfect complement. The climbing at Venasque was pretty much all steep and very pumpy on jugs and sandstone slopers.

I found the climbing at Venasque (and maybe the grades!) seemed to suite us well. Over three days I ticked 12 routes 7a and above (one 7a, one 7a+, three 7b's, two 7b+'s a 7c and one 8a). My overriding memory from most of the routes was enjoying climbing just being horrendously pumped and just about making it to the chains. The 7c was a particularly memorable experience; I managed to onsight all 30m of the route making it up to the last hold but I was too pumped to hold it! On his flash attempt Luke managed to hold the last hold for about 5-10s but he also was too pumped to clip the chains! I got the route first red point, the climbing on both this 7c and the 8a was really fun steep wall climbing on positive pockets and jugs!