Mid week came the big tick of the winter. Teaming up with John Orr and Luke Brooks we made an (possibly the third of the year? ) ascent of Central Ice Fall direct VI 6 on Craig y Rhaeadr,  this was a route I won't forget in a while.


I took the middle pitch which was long (45m!) and sustained. Luckily all the ice climbing I did in Cogne paid off and I didn't get (too!) pumped. Even so I felt pretty worked at the top. The hanging belay below the final icicle was not a particularly good place to try and recover. Hanging off a couple of screws and a detached pillar getting sprayed by ice water was not particularly comfy! However I can confirm that under such conditions cream eggs taste amazing!

With a bit of trepidation John Orr swung out onto the hanging ice pillar, climbing delicately and not placing any screws in the pillar itself John cruised his way up onto easy ground at the top. 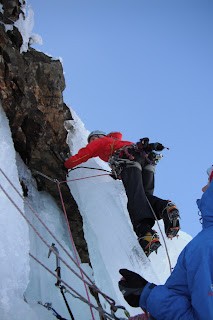 We were all smiling all the way back to the car. Even though I was inspired by Caff and the Man of The Pass challenge we opted for the lazy option of a late morning coffee! It felt amazing to have been climbing world class ice 10 min from my house with only a 20 min walk in. If only conditions like this would stay all winter!


After a day of rest and catching up on work I headed out for a spin on the road bike with Ryan who's training to cycle to Switzerland in the summer as part of Team Peddle to raise money for a good cause. I suggested a loop up from the A5 over Ysbyty Ifan thinking that we would start from Betws. The response I got from Ryan was "sounds great, shall we start from mine or yours?"! This turned out to be be my longest cycle yet, a 90Km round trip, great fun. The road over the top was amazing, smooth tarmac and warm sun with a bit of snow on the side.


Dropping down into Penmachno was still pretty snowy on the road which made the descent rather sketchy!

The adventures keep on coming: I'm currently writing this post out on a 38ft sail boat in the Irish sea. With less than 12hrs notice I got a call from my friend Jade who had been called on last minute to deliver a boat from Liverpool to Pwllheli. So here we are cruising along, 8hrs in and with no land in sight. In another 10hrs time we should get to Pwllheli, it's going to be a long night!...fingers crossed for plain sailing.

Update: we made it! It took almost exactly 24hrs of continues motor sailing (sadly much wind was lacking). A full-on experience but not one that I shall be keen to repeat regularly. Unless it was for climbing in Greenland maybe?! http://www.youtube.com/watch?v=OsVl_rzkcx0