And snow it begins!

Last week saw the proper beginning of winter in North Wales. I woke up to a good few cm of snow. Temperatures have not risen much above zero for the past few days.

I spent the weekend sleeping in the van, getting out in the mountains and working on the bar.
After a seriously amazing tour round the dmm factory Saterday morning my dad and I walked up Lliwedd via the Cribau ridge. Great day out. Ice was starting to form but the turf was not quite frozen.

Saturday night was super cold the thermometer in the van read -7 degrees C (inside!) when I woke up. I was super warm due to a massive down sleeping bag, a duvet and a blanket! Unfortunately by the morning all my water had frozen and my gas wouldn't work which meant I had to go without the morning coffee. Interestingly my milk had not frozen so cornflakes were still on the menu. Even though it was cold I still really enjoy sleeping in the van, its awesome to be able to slide the door open in the morning and watch the first rays of sun hitting the Snowdon horseshoe.


On Saturday Lawrence (Mountain Leader) Ramsay and I climbed the Parsons Nose on Clogwyn Y Ddysgl. Again the snow was very powdery but the turf was solid. We topped out into  alpine esq sunshine. Another great day. 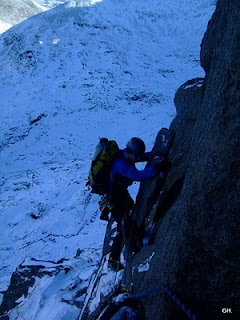