Slate Head but Not a Gritstone Gorilla ....

The spell of good weather has continued, iv been making the most of my last fewer days at home in North Wales before I go back to uni for the dreaded 3rd (exam) term.

Yesterday Chris and I worked our way through a few sport routes in the slate quarry's. We started off with Gerbil Abuse 7a, its an amazing route with super funky climbing. We then moved on to True Clip 7b+ but found it nails! A  Better name would be 'Clip Stick' as Chris had to clip-stick his way up it. We finished off with Geordie War Cry 7a+ which is an awesome route. It some how manages to be pumpy, strenuous and balancy at the same time. Chris also climbed Fools Gold E1, was good to climb this excellent classic route again. 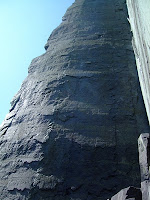 The Amazing but Painfully Blank Wall of Tue Clip 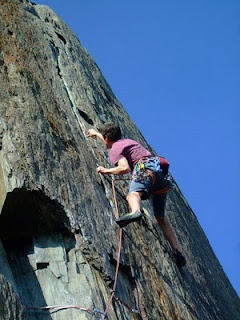 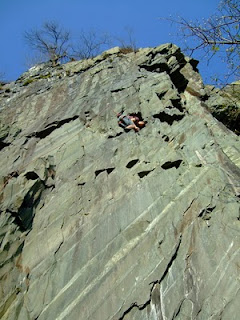 Chris Enjoying the Contorted Hands off Rest on Geordie War Cry
Today we hit the Orme for some more sport climbing. Even though the sun was out the air temperature and the wind was pretty cold, therefore the day was spent sun chasing.
We warmed up on Contusion 6c then moved on to the classic but polished Axel Attack 7a+ which went on the first red point. Following the sun we move along Marine Drive and climbed Precious Metal E1 5b. The sun moving towards the West necessitated moving on. We went down to the little rather unknown crag of St Tudnos. This is where I learnt I was not a Gritstone Gorilla after failing to get up Gritstone Gorilla E3 5c it cleanly. Partly due to lack of commitment and partly due to the onset of a mammoth arm pump. It's wild route, it goes over a massive overhang, check out the photos below. 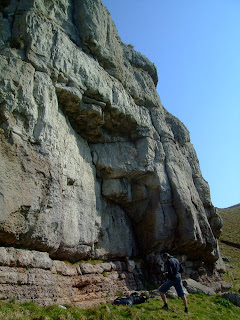 The Impressive Roof of Gritstone Gorilla 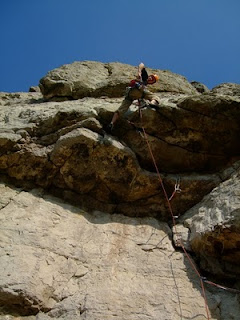 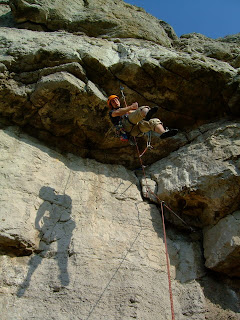