Filming The Future is Electric: Tesla EV in Snowdonia

Recently I was lucky enough to get the opportunity to make a couple of promo videos for Whitecar a Tesla EV rental company.


I first hired one of their Tesla Model S EV's to surprise Trystan Lea. We're both EV enthusiasts currently driving Nissan LEAF's. It was amazing to experience the power, range and high tech features of a Tesla e.g. self-driving auto pilot, self-park etc. Not that had any doubt before but the future is most certainly electric transport! I made a short video of our time with the Model S driving around Snowdonia with a few drone shots.

Whitecar liked the video so much they asked me to make a similar clip for the Model X. Unable to resist a chance to experience a Model X for a few days I agreed. The filming over two days was a lot of work, I enlisted Ryan Brooks to help me. The weather was terrible for the two days we had the car, super high wind and driving rain! Ryan did an amazing job flying his Mavic Pro drone in extremely challenging environments. Two days of filming generated 85GB's of footage, it took me weeks to review and edit it all.

I'm very pleased with the result. I look forward to working on more film projects in the future. And yes...the Model X was amazing, one hell of a EV! Here are the final edits:

This was one of my favourite shots from the video:

Trystan calculated that in this 5s clip the wind turbines in the background generated 1100x the energy consumed by the Tesla in that time period! 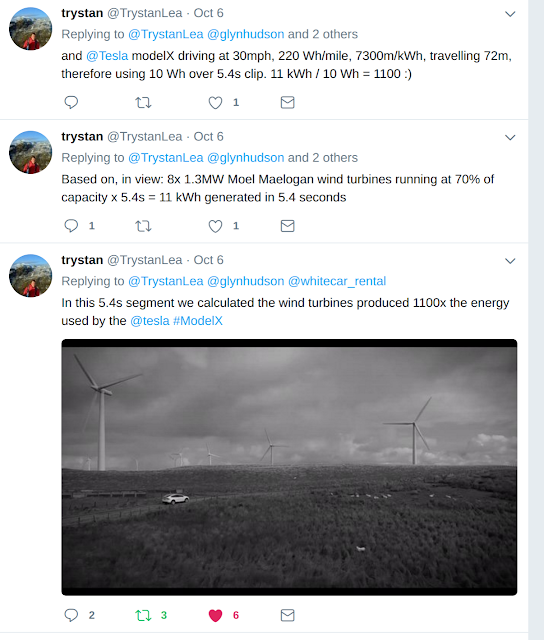 Here's a few photos from behind the scenes: