Walking up to Taghia it's impossible not to be inspired (and slightly intimidated) by the big limestone walls rising steeply up from water worn gorges behind the village. I couldn't wait to start climbing.
I was very impressed with the consistently high quality of the climbing on almost all the routes I climbed in Taghia. Usually when climbing long routes in the mountains it's accepted that the quality of the rock and climbing will be less then on our favourite single pitch crag, I was presently surprised that this was not the case in Taghia; I would not hesitate to describe the routes I did in Taghia as some of the best single pitches of climbing I've ever done stacked on top of each other to make pitch-after-pitch of great climbing. The style in Taghia is often wall climbing on crimps but there are also some tufa sections and plenty of slabs and roofs to mix things up.

Here are the notes I made on each route together with topo link and photos, hopefully these will be useful to anyone else lucky enough to climb in this amazing area:

5th May: La Trufa 7a 20m, Dive Master 7c 26m. Les Colonnettes De Tamdarote - Stunning couple of routes on steep single pitch tufa crag. But of long and strenuous walk up a scree slope to get to, but worth it. The crag actually faces East instead of West as the guidebook indicates. The three routes on the crag are all good and apparently the grades of the routes (left to right) are more like 8a, 7c, 7a instead of 8a+, 7b+, 7a as printed in the guide book. 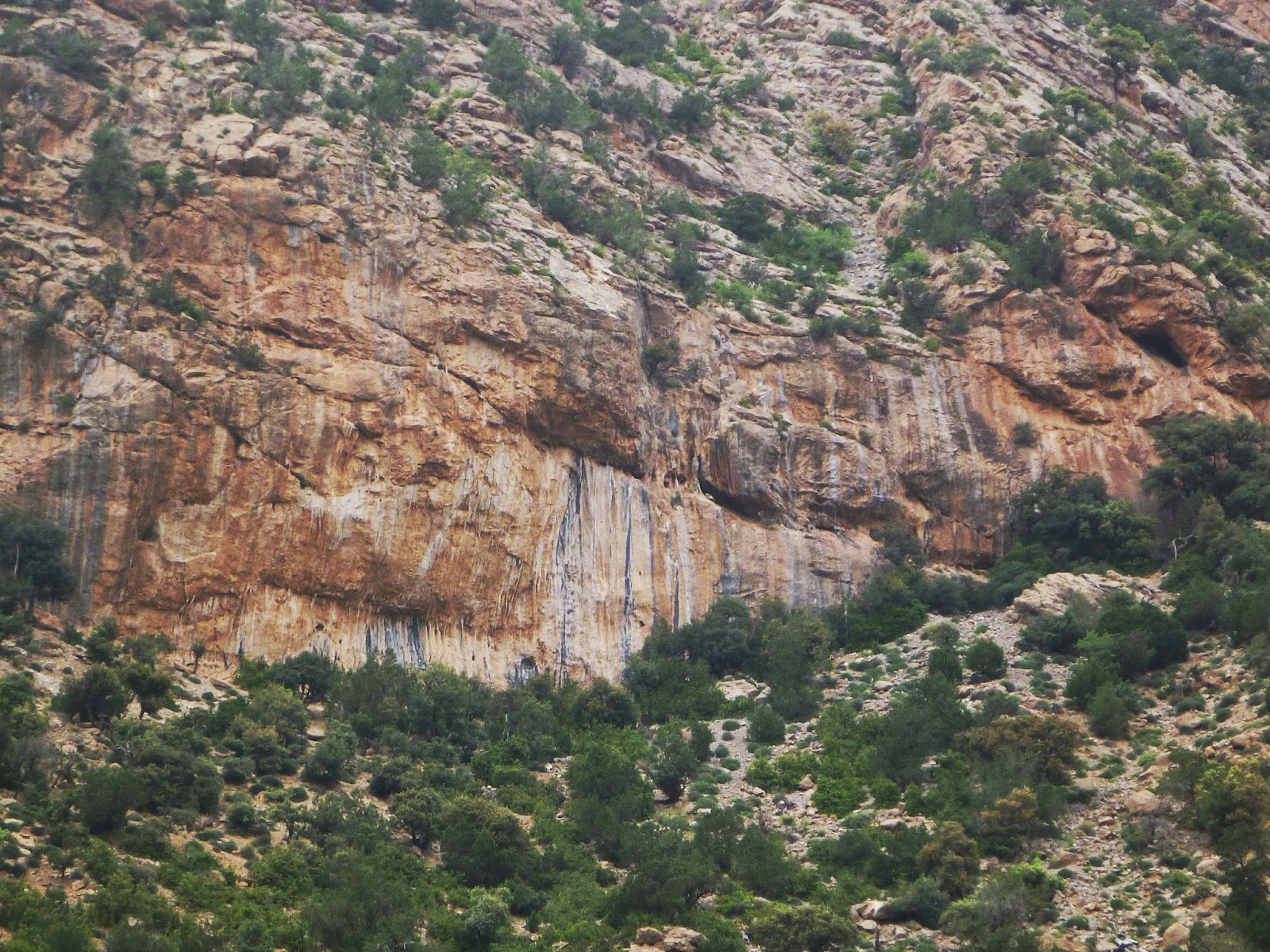 4th May: A borie ou je tue le chien 6c 250m  Taoujdad SW face 3171m - Fantastic crimpey wall climbing with nice exposure. Bit of a long walk in but worth it to top out on a proper summit. 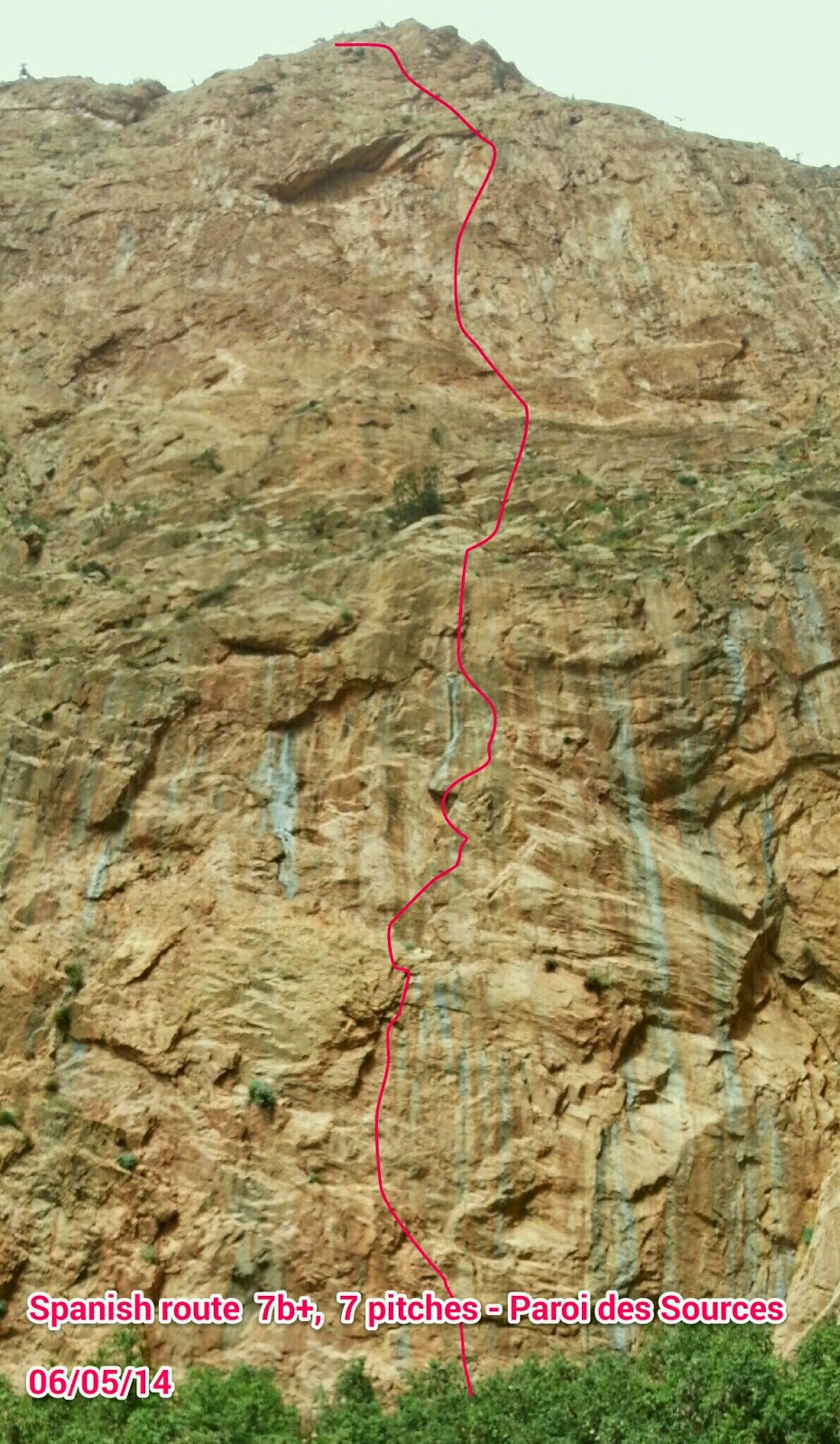 For the first week we took it easy, starting on easy short routes (only 7 pitches!) and taking plenty of rest days as Sophie nursed an injured elbow. On such a rest day a guy called Alex Honnold turned up to climb with a couple of strong strong South African climbers Clinton and Gosia who we had been hanging out with in the gite. On the the day Alex arrived they had just got back from a big route and really needed a day or rest and skin grown before heading out with Alex, I picked up the gauntlet and headed out for a 'casual outing' with Alex. Moving slow is not Alex's style; after a relaxed start we made what is probably the fastest ever ascent of a route called Shucran, we swung leads linking blocks of three pitches at a time on an 80m rope and moved together on the easier sections. It was an awesome day out, I felt like I had received a crash course in big wall speed climbing techniques like linked pitches, clipping occasional blots using a 'duck', gri-gri simul-climbing and simul-rapping. This 'casual outing' as Alex called it was good preparation for climbing Fantasia with Alex later in the week. See the notes I made at the time:

7th May: Shucran 380m 7b+,  Oujdad Face Ouest. Good route but a little sharp on the fingers in places. Route could be better bolted, quite a few of the pitches are short and can be ran together. Top belay is missing hangers, backed up with a sling. Speedy ascent climbing with Alex Honald, 3.5hrs to the top, did 12 pitches in 4! Great climbing, super technical, always interesting and varied, lots of traversing. We abseiled the route as going all the way to the summit would be quite a long scramble from the top of the route. 8th May: Libiti Bito 7b, Timghazine, Infrig, Paroi Du Haut. Loose, dirty and run out in places. Obviously does not get climbed often. Bailed after 7b roof pitch (4 pitches up) which I probably more like 7c in the routes current (very dirty) state. We abbed of then I had to do free hanging prussic 20m back up to free rope from crab I accidentally left to hold me in to the wall on abb, I forgot we were climbing on doubles joined with knot for abbing...oops.

10 May: Fantasia 600m 7c. Another day out with Alex Honnold. Awesome route, stunning climbing. Pitch 3 (7b+ 'cheese') pitch is probably the crux; savage crimping on edges, hard to read if not chalked. I climbed again with Alex Honald, moving quickly with managed 7.5hrs base of route to summit. We topped out and walked out, quite a lot of jungle bashing easy scrambling to get to the summit from top of the route. 11hr round trip from gite to gite. Quite a long day out. I fell once on lead on 7a after linking it together after 7b+, I was bit tired and rushing with rope drag. Also came off seconding bottom of top 7c pitch when foot slipped. tenuous climbing in places. 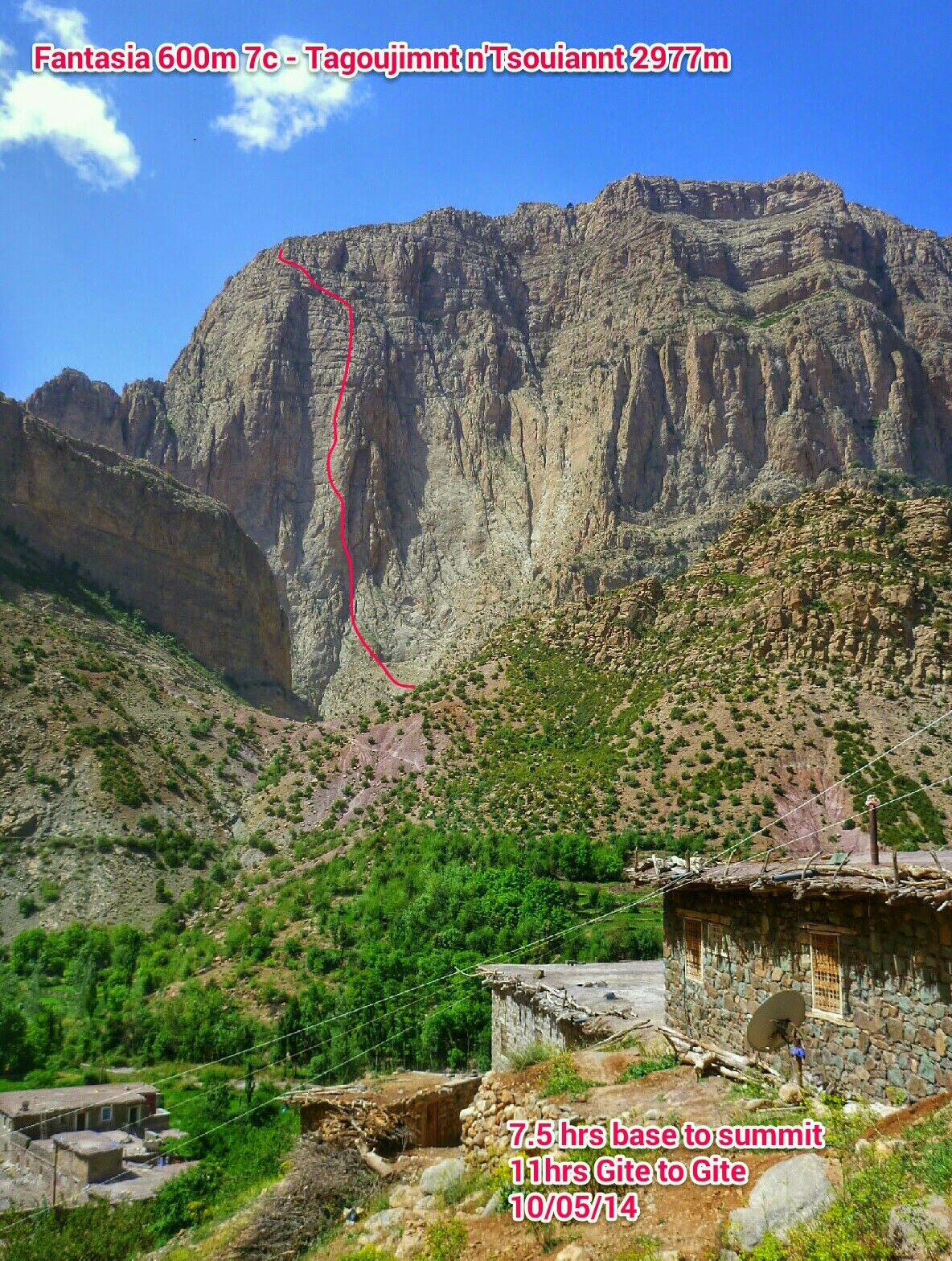 The longest day out I had in Taghia (and probably one the best) was climbing L'Axe du Mal. This is a long route on a remote wall with a long approach and descent. Teaming up with Sophie and South Africans Clinton and Gosia we left the gite at 6am after a standard quick breakfast of bread and Jam. After a tough day of amazing climbing, and lots of hauling we topped out at about 8pm getting back to the gite well after dinner at about 11pm. It was a fun day going a team ascent (two independent teams) with the South African crew, nice social belays :-)

Alex also joined us close by, having a day out 'scrambling' by himself. It was very impressive and slightly scary watching him make the first on-sight solo ascent of Rouge Berbere a 500m 7b hand jamming crack on the wall adjacent to L'Axe du Mal. Alex cruised the route in 2.5hrs stopping only a couple of times to sit down, take off his shoes and wave to us.

12th May: L'Axe du Mal 7c+ 500m, - Tadrararte. Fantastic route up a stunning big remote wall, felt like a good adventure. The climbing was all good and quiet varied, generally face climbing with a number of (hard) slab pitches and one roof pitch. I found the 7b+ slab to the the crux and I aided through the 7c+ three bolt bolder problem up high since we were pretty tired by this point. Total 16-17hr day gite to gite! 11hrs on the route from base to summit. We were a little slow in the upper sections since there are lots of hard pitches. 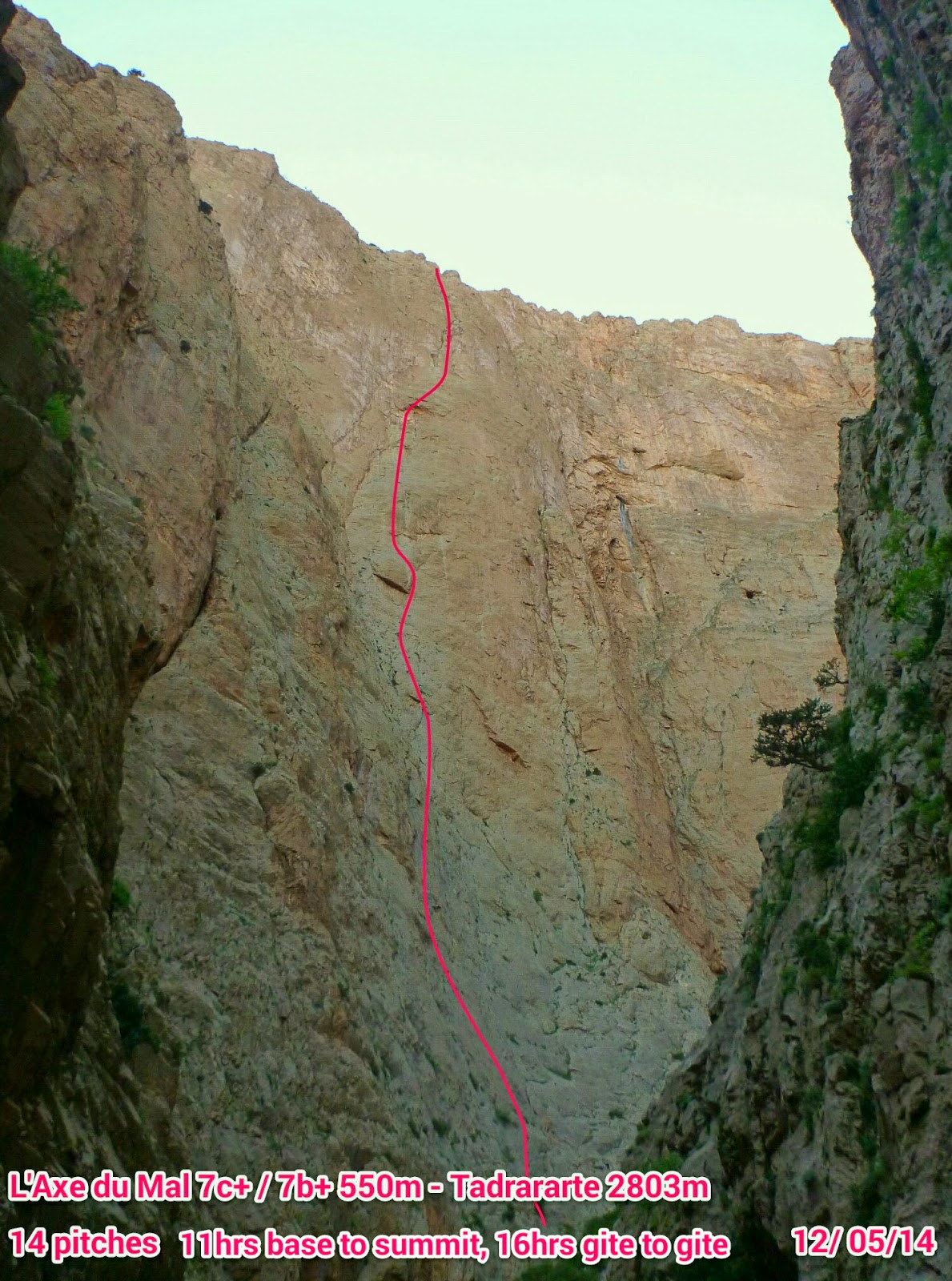 In the couple of weeks I was in Taghia I added up the total vertical climbing we did was 2510m. No wonder my climbing shoes which were new at the start of the trip are now rather worn and my feet ached walking around Marakesh on the journey home!

Thanks to Sophie, the South African Crew (Clinton and Gosia,),  Alex (Honnold), the tough boys from Netherlands ( Ka, and Hja), the French crew with Anaud Petit and everyone else for an amazing unforgettable trip.