I've just returned from a couple of weeks climbing in Siurana in Catalonia in Northern Spain. Siurana is a climbing area that I had heard a lot about and seen many photos, but never visited. I had been put off by stories about Siurana being bitterly cold in during the winter months, so on previous winter sport climbing trips a more southerly option such as El-Chorro has been more appealing.

This year I took the plunge and luckily it wasn't too cold, the air temperature was quite cool, getting down close to zero at night but the warmth of the sun was strong making climbing in the sun actually quite hot!

Being in the north of Spain opens up the transport options to get there, for extended trips driving down in a camper van or car can be an option. Driving long distance with one person in the car emits about the same amount of carbon as flying but two or more people in the car results in a significant carbon saving over flying.

It is also possible to get the train from London to Barcelona for about £100 if booked in advance. It's even possible to get a sleeper train to Barcelona making the train a viable option for quick hits. Travelling by electric train emits about 6 times less carbon than flying according to loco2's carbon calculator. The website loco2.com makes booking European train as easy (or easier since there are no hidden charges or baggage issues) as booking a flight. Once in Barcelona its easy enough to get a train to Reus then bus to Cornudella, from here hitching up the road to Suriana campsite is easy.

I got to Siurana using a combination above, getting the train to Chamonix then driving down in a friend's van. We came home in the van, driving back over a couple of days stopping off for some climbing at Gorge du Tarn.  I enjoyed the train journey from London to Chamonix much more than flying. The TGV trains that cross France are awesome, super fast and comfortable. With interesting scenery, plenty of work to do on my laptop, some music and a good book the journey flew by. The only slightly stressful part of the journey was using the underground Metro to change trains in Paris, although leaving plenty of time and following good instructions from seart61.com and an excellent video guide it all went smoothly.

Siurana is a beautiful place, the tiny village of Siurana is full of character; little cobbled streets and rustic  buildings situated in a stunning cliff-top location. At one point in the past the village was used as a prison!


I stayed in a friend's van for the first week and a little gite in the camp-site for the second. Almost all the climbing in Siurana is accessible within a 20-30 min walk from the campsite. I was blown away by the amount of quality climbing and number of sectors and routes in Siurana. After two weeks there are still many quality sectors I never even visited!

The climbing in Siurana is quite different to the classic Spanish tufa pulling found in El-Chorro and Costa Blanca, the red linestone walls in Siurana are often vertical or slightly overhanging with crimps and the odd pocket.

As well as the crags around Siurana we also visited the big sprawling crags of Monsant which are visible high on the hillside above the nearby town of Cornudella de Montsant. Accessing Monsant often involved quite a bit of off road driving. From experience this is best avoided after rain! The climbing in Monsant is quite different to Siurana, the rock is conglomerate limestone giving a confusingly large number of pockets!

Almost all the routes I did at Siurana were of very high quality, it's hard to pick individual highlights. The three routes which were most memorable for me were...

Montsantrrat 7b+ at Monsant which I managed a very enjoyable onsight as daylight was fading at the end of a bit of low psyche day after getting shutdown on Devoramingas 8a, a long and powerfully sustained pocket pulling monster of a route. We had initially planned to try Hydrophobia, another long 8a but unfortunately it was  wet, which was a shame since it looks amazing!


Crosta pànic (P1+P2) 7c on the right hand side of the impressive El Pati sector. A full 40m of climbing doing both P1 (a classic 7a+) and P2 together as one. It's probably not the best 7c in Siurana, the route was a bit un-balanced being a pumpy 7a+ into a few hard bouldery moves then a good no-hands rest before a much easier top section. That said, it's certainly not the worst; it was enjoyable for me, being my first 7c onsight.


Anabòlica 8a on Can Piqui Pugui village crag sector.  In the second week of the trip I was psyched for a little red point project. Anabolica is the classic route of the Piqui Pugui sector breaching the most impressive section of the crag. The hard section is relativity short and well, 'hard'! A powerful sustained sequence of really cool big moves between deep pockets overcoming a bulging overhang. It was not an easy red-point, the route took me 12 attempts over four days with a rest day in between. I finally succeeded with the smallest margin on 6th red-point of the day, on the last day of the trip, just as the day light was fading! Many thanks to Amy for being a belay hero! 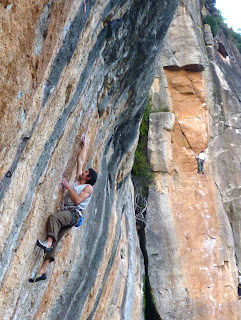 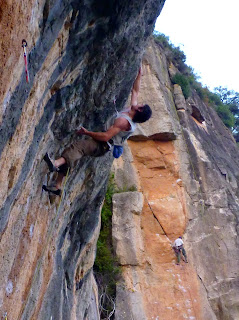 On trips like these the people are as important as the climbing, it was great that so many good friends from North Wales were also out in Siurana at the same time. The long winter evenings were never dull!

Update: Google Auto Awesome just made this little video for me..slightly creepy but pretty cool since I didn't have to do any editing work :-)