I can feel my heart pounding, partly with the physical exertion of 45 minutes of steep up-hill walking and partly with excitement, in a few moments I will be arriving at the base of one of the best crags in the world. After completing the necessities of dropping my heavy sack, stripping down to my boxers and sitting in the shade while my body dries off, attention soon turns to the beautiful panorama of lush alpine foothills and then up at the multi-coloured streaked limestone, curving gently and stretching as far as I can see in both directions. The rock is generally slightly overhanging and is often well adorned with generous pockets. Climbing at Ceuse, really does feel a bit like being a child in a 2Km long 100m high sweet shop!

Chris and I have just returned from a weeks climbing in Ceuse, it was the first time either of us had visited this world class venue. A world class venue obviously attracts many of the world's best climbers; we were often left feeling like beginners!  Some guy called Chris Sharma was there trying a tricky looking route called Jungle Boogie which Adam Ondra recently got the first ascent of a few weeks ago. Chris came across as being a nice guy, always taking the time to say hi to everyone at the crag. Saying hello to people was a bit of a gamble, involving a quick guess of their nationality; Italian, German, Czech, Spanish, French, Irish and British all featured in roughly equal numbers.

With so many world class routes to choose from it was hard to know where to start. At the end of each day, even though we'd done quite a few routes compared to an average cragging day, we always felt wiped out long before the enthusiasm dwindled. Being up at the crag for around 1pm meant we were often some of the first people there, partly due to most of the crag not coming into the shade until the afternoon. A normal climbing day for us then ended when it was nearly dark at about half nine, making the most of the coolest hours of the day.

Route choice was decided by what was free and what was dry on the first couple of days, although we were told this was actually a quiet time for Ceuse. The popularity of the crag did make jumping on routes easier though since many routes already had the quick draws in place; it sometimes felt like a waste of effort to have carried ours up there! One of the routes we tried on the first day was Bourinator, a classic and savagely steep 8a roof climb. Lacking in raw power after months of long stamina European sport climbing, trying the route a couple of times left me feeling totally destroyed. With many other routes to choose from I decided not to spend any more time on it. Chris however bagged it on the last day, bon effort!

For the rest of the week I chose to play to my strengths and enjoyed onsighting plenty of amazing routes. By the end of the week I had clocked up 3 7a's, 3 7a+'s, 2 7b's and 1 7b+ onsight. I did succeed on a quick redpoint of the classic route Changement de Look 7c, which was an intense sequence memory exercise. The crux of the route was a long, sustained and complex sequence on small pockets.

The climbing at Ceuse combined with the walk-in and out each day makes for a physically draining experience, people mainly choose to climb only 2 or 3 days on without a rest. After 3 days on we certainly felt like we were ready for some rest, so we headed south to visit some friends in Sanary sur Mer on the Mediterranean and indulged in leisurely activities such as swimming, going out on a speed boat and plenty of eating! 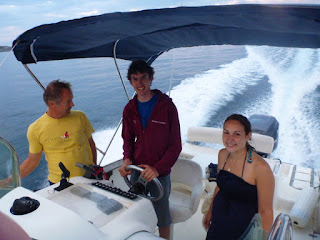 After heading back to Ceuse the final few days flew by. Most climbers we spoke to were staying in Ceuse for at least three weeks, some were there for months! After sampling the climbing I can see why people stay for so long, there are just so many good routes and trying to redpoint harder routes takes time. I think the minimum length of any future trips to Ceuse will need to be at least two weeks!