Snakes and Ladders (and tunnels)

The other day I took Trystan and my girlfriend Amy on a traverse of the slate quarries. I did the traverse called Snakes and Ladders which was described in Climb/Climber magazine in June/July, I think it was written by Peat Robbins. I have been to most of the climbing areas in the quarries before but had never linked them in one go. If you are not familiar with the various areas mentioned then all is explained in the North Wales Slate guide book (which is unfortunately out of print!). Ground Up should be putting the finishing touches to the new guide as we speak. Although I have heard it has been delayed due to continued new development and access issues.
Although no particularly hard climbing is involved in the traverse it is arguably more dangerous than climbing! The climbing mag article gave the route a grade of HVS (experience) which seems about right given the objective dangers. We roped up and belayed each other up/down certain sections. Here is a brief description of the route we followed (with a few photos, larger photos can be viewed in my picasa web albums, follow link on right panel):

Take the tunnel from the right side to Dali's hole into Australia. Climb up the chain which hangs down from a tunnel on the left (strenuous; can be protected by clipping into the chain with large screwgates). 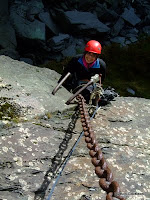 Walk through the tunnel then down climb/ab off the tree down to Dali's Wall (on your right). Walk up the steps to the left of Dali's wall and take the right hand tunnel above then the right hand fork when the tunnel splits (following old train tracks) to emerge at the bottom of Australia on the Tasmania level. Scramble down then up and right, up Australia's vast the Oil Drum Glacier to the first large level (marked with what looks like white paint) 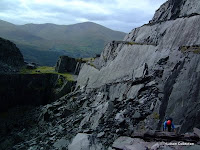 Walk right along the level then ascend a series of ladders up to the G'day level at the top of the quarries. Walk over to the top of The Lost World, abseil down heaven walls (ab point next to Dinowric Unconquerable, see guide book). 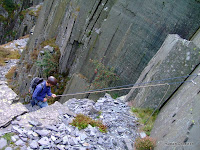 Down climb another level (dodgy, protected for 1st person by taken a belay on the tree) to gain a series of ladders leading down to the bottom of The Lost World (complete with its own pond). Walk through a tunnel on the right which leads into Modor. Follow the level round to the left to gain ladders which lead up to the Khyber Pass (ladders are in poor condition with several rungs missing at some points). 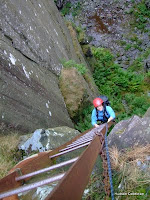 Follow the incline down to join the tourist path. Give yourself a pat on the back! It took us about 5hrs including faffing and snacking.